All the rusted signs we ignore throughout our lives,
Choosing the shiny ones instead.

Whoah, last week was interesting. If you’ve been paying close attention, you know that I made my goal*,**:

And here is the proof:

What did I do to celebrate? I took the family out to Dairy Queen for a treat. And let me tell you, I went off the deep end. No little cone or mini-sundae for me. As soon as I laid eyes on the Triple Chocolate Brownie, my lizard brain took over and all willpower flew out the window. I scarfed it down with reckless abandon. This resulted in a painful case of sphenopalatine ganglioneuralgia***.

Perhaps it hasn’t hit me yet. Or maybe something else is going on. While I have the money part figured out, maybe I know deep down that I still need to work on the “life” part which is far more important. Money is nothing more than a tool to live right. Money is easy. Living right is hard.

So, Mr. Brain couldn’t come with anything profound, but I have a couple thoughts anyway.

Very little in my life has changed or will ever change. As I type this at 5am on Saturday morning, my “to do” list for the day includes:

The lifestyle of a typical millionaire isn’t private jets and caviar. I am typical and my life is not exciting. No new car shopping. No visit to a mall seeking out crap to buy. No weekend in Aspen. Boooooorrrrrrring. (Mrs. 1500 note: Speak for yourself. I’ve got some shopping to do…)

I’ve said it before and I’ll say it again; I’m content with my life as it is now. The idea of more stuff actually grates on me. More stuff == more time to take care of the stuff. No thank you. I have enough to do already. I need every minute.

I still feel like the same guy I was in college where all of my food and spending money came from a job that paid me less than $40/week. Of course, my quality of life is a little better than it was then. I no longer eat spaghetti 5 days/week.

And I really did eat spaghetti constantly in college. It was easy and cheap. I still remember the day I didn’t have to eat it anymore. Let’s take a little trip in the Wayback Machine.

Everyone remembers certain days in their lives. If you’re around 40, I’ll bet you remember where you were when:

And then, there was the grocery store…  I had just been paid for the first time from my first real job after college. It was for two weeks of work and came out to about $1,200. After depositing the check, the first thing I did was go to a grocery store and buy ground beef. Because a pound of meat was about $3, this was something I never purchased in college. It was a glorious day that I still remember well.

So, here I am 17 years later and some stuff has changed:

However, the important stuff has stayed the same:

At the core, I value efficiency and simplicity. In some cases, it may seem like I do things to save money, but that’s not the case. For example, it would take me far longer to go to Supercuts or Jiffy Lube than it takes me to cut hair and change oil myself. Time is everything. A side benefit is saving money.

The best joys in life are still the simple things; a bike ride on a warm day, listening to live music while laying in the grass on a summer evening, having two completely free hours to spend with a great book, walking around town with the kids and writing right here on this blog. It’s trite, but true; the best things aren’t things at all.

What made FI possible for me, plain and simple, is fear and insecurity. We weren’t poor growing up, but at times, not far from it. Until fairly recently, I’ve been terrified of not having money. I used to have nightmares about it.

The question that I ask myself is this:

If I had grown up under better circumstances, would I still have good money habits?

The folks who impress me most are those who grew up normally, but still somehow came to the conclusion that a simple and frugal life is the way to go. The Frugalwoods and Mr. Money Mustache come to mind.

I suppose that I should stop thinking about all of this as it doesn’t matter anymore. Even if the motivation is different, the result is the same. And my nightmares are gone now. I’m a different and better person. That pile of money equals security and time. 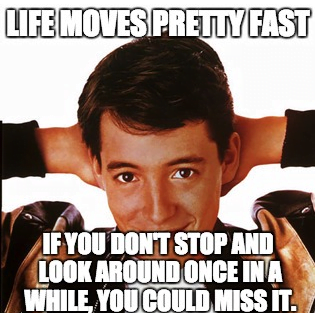 Where do we go now?

I’ve been thinking about my life a lot lately. The thought I’ve had is that I’ve been living on a superhighway, pedal to the metal for the past 20 years. I’ve had no time to even look sideways. All too frequently, I’ve pushed the speed limit with bad results. It’s time to slow down.

I have no idea what an average day will be like for me in a year. One thing I know for sure is that it will be anything but average. I hope the rest of my days hold the same. It’s so much more interesting to have an open and unplanned road ahead instead of hours behind computer screens, selling my time away, serving someone else.

It’s time to get off that superhighway and start meandering down the country roads. There is so much to see and do. Besides, those shiny signs are boring and repetitious. The old rusty ones have character and stories to tell.

All the rusted signs we ignore throughout our lives,
Choosing the shiny ones instead.
I turned my back, now there’s no turning back.
No matter how cold the winter, there’s a springtime ahead.

**Careful readers also may have noticed that I moved the goalposts once. My original goal was $1,000,000. I later changed it to $1,000,000 and no debt. This new goal required me to either pay off my house or increase my money pile enough to cover my mortgage debt.

When I started the blog, we were living in a neighborhood we hated and in the process of selling our home. We will be in our current home for at least the next 12 years, so my numbers are on firm footing now. As of my April mortgage statement, we have a little under $120,000 to go on the mortgage. So, to consider myself FI, I’d need $1,119,840.81:

****Go get yourself one of those brownie things at DQ. It is delicious. Just watch out for that sphenopalatine ganglioneuralgia… 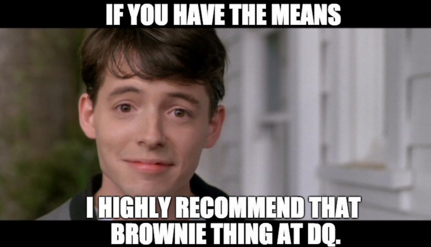