My buddy Jim wrote a post last Tuesday about trolls. He was inspired by an article about us that went viral and showed up on Yahoo!. Like every other personal finance success story, the trolls came out in force. No bother, seasoned bloggers know not to look at the comments.

While I don’t entertain their vitriol, lately I’ve been thinking a lot about the trolls. I mostly feel sorry for them. One of my goals for the blog is to inspire people to live a better life. However with some people, I’ve only succeeded in inspiring them to reveal the ugliest parts of their personalities. Most of the trolls are probably OK folks, but the anonymous nature of the internet brings out the worst.

Perhaps I should change the 1500 Days tagline from this:

Why the Trolls are Trolls

I’d expect a well adjusted person to respond to a random article on the internet like this: 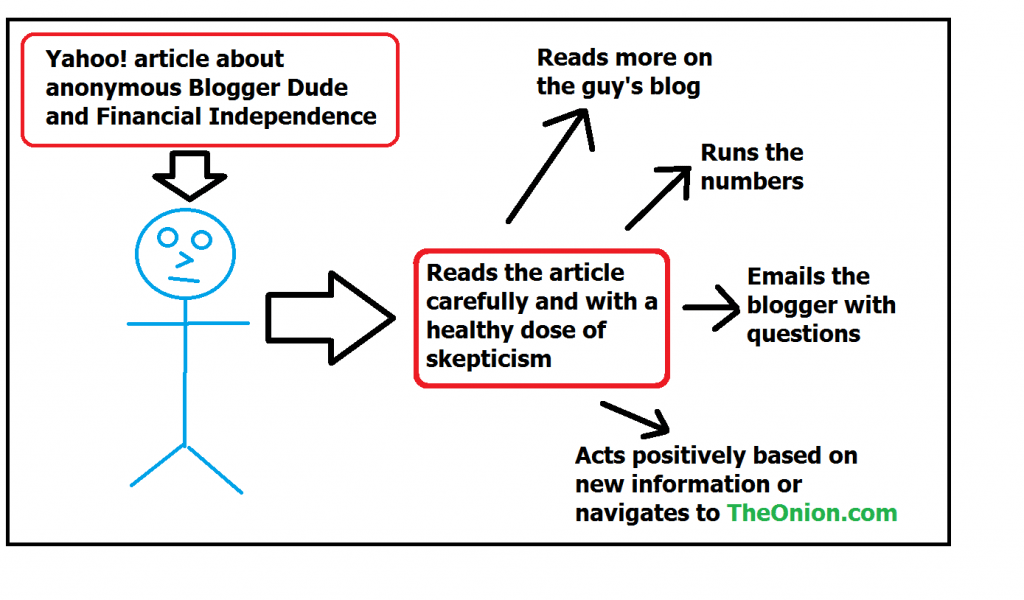 Here is the troll version: 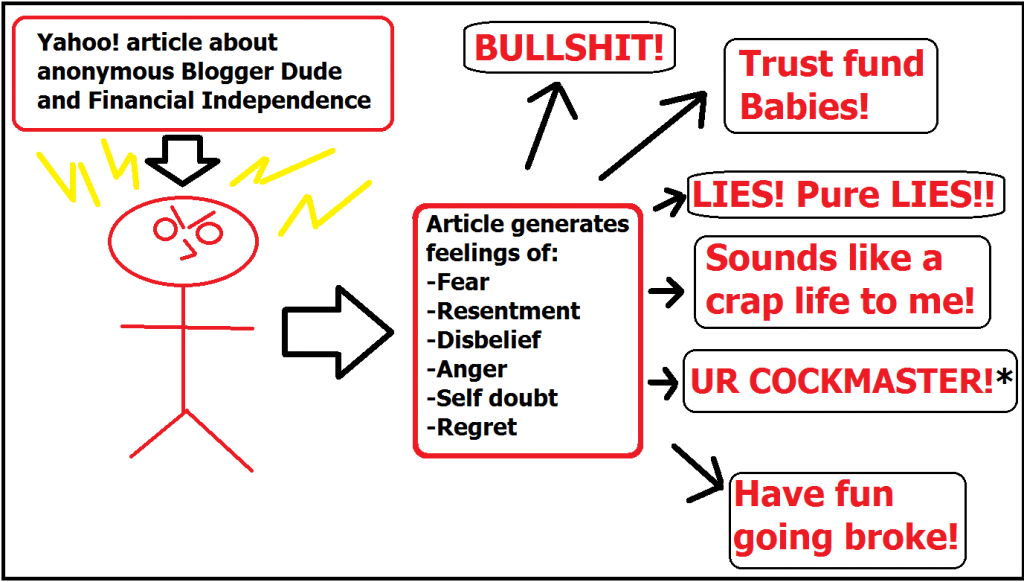 It is much easier to make excuses than to put in the hard work.

It is much easier to build straw men (“Trust fund babies!” “What inheritance did they get?”) than to acknowledge that the article may be true.

It’s much easier to label me a fraud than to admit your own mistakes or change your direction in life.

The easy path is – well, easier. No one accomplishes great things by being normal though.

And then again, maybe I’ve done it all wrong

The first thing I’d point out to any troll is what my life has looked like for the past 17 years. The core of my nest egg was built flipping homes. The Mrs. and I were live-in flippers, meaning that we lived in the home while we worked on it. And it hasn’t always been a fun time.

It’s not great working 40 or 50 hours per week and then coming home to another 30 or 40 hours of swinging hammers and painting. When co-workers ask me if I caught certain TV shows or movies, the answer was always “No.” No big loss as TV is mostly a waste of time, but that isn’t the end of it.

We decided to fix up our current home as well. With two children, this was a mistake. We’ve been working on it since June 2013 and it still isn’t finished. It’s almost there, but not quite done. And it’s caused lots of stress:

I’m not writing this so you feel sorry for me. Despite my bitching, life is wonderful. However, thinking back on it now, I would have structured my life a little differently if I had a Do Over button. I would have slowed down the pace. The last three years have flown by in a blur.

Regarding the trolls, I don’t think they’d be so nasty if they took time to understand the whole picture. They’ve already won this battle because I’ve given them more time than they ever gave me.

Oh damn, I feel a song coming on. I can’t fight it. Brace yourselves. It’s called, Yo Ho (A Troll’s Life for Me) sung to the tune of the Disney pirate song:

Yo ho, yo ho, a troll’s life for me.
We spew, we spit, we’re nasty and angry jerks.
Drink up me venom, yo ho.
We swear and disparage and we kick you where it hurts!
Drink up me vitriol, yo ho.

Yo ho, yo ho, a troll’s life for me.
We put-down and insult, we slander and shame.
Drink up me venom, yo ho.
We threaten and taunt, you’re gonna feel our flames!
Drink up me vitriol, yo ho.

If you don’t want to believe me…

And if the trolls don’t like me, there is no shortage of other fascinating people to follow:

What is the common thread with all of these people? They’re all smart folks who worked hard and figured out what they wanted out of life at an early age (none are over 40). They all live extraordinary lives that are worth studying.

The Yahoo! story was overwhelming and tiring. While the exposure was nice, these stories always focus on the wrong thing with a click bait title** to suck people in. I understand, Yahoo!*** is a business and needs people to click on the articles to get advertising dollars, however I really dislike the misleading titles.

No one likes to be fooled. While the author went on to explain the truth in the article, the damage had already been done.

It’s not all bad news though. I’ve received loads of nice comments here on 1500 Days and in email. Some folks told me that they checked out the blog and were inspired to make changes. I have no idea how many lives I actually impact and what the extent of it is, but if my silly words change even one life for the better, it’s all worthwhile.

*Yes, someone once emailed me with: UR COCKMASTER! That is a lofty goal and I’m not worthy. I am many things, but I am in no way, shape or form, COCKMASTER!. 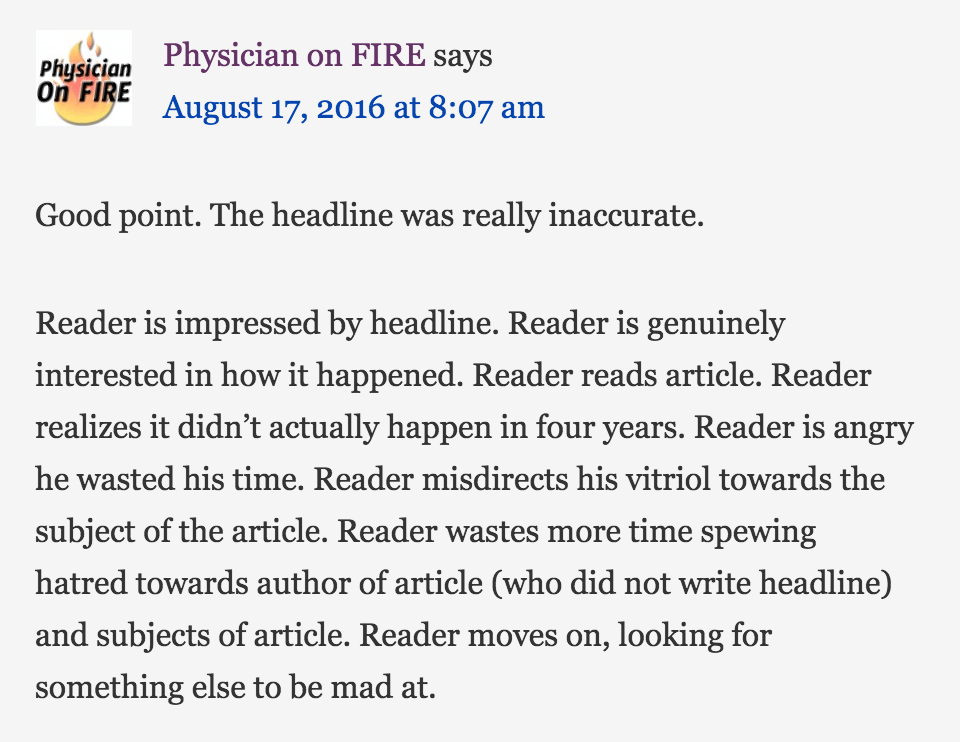 ***Silly Yahoo! titles aside, the real focus should be on life. This blog is about money, but deep down, it’s not about money at all. It’s about how to live:

Once you live your life right, the money issues will sort themselves out. You’ll be in a better place. Being rich in life is better than being rich with money.