I’m obsessed with optimizing my spending. Who wants to waste money? Not me.

Optimizing some expenses is so obvious and easy, I just assume everyone else is doing it. That’s definitely the case with mobile phone plans. However, I’m consistently proven wrong. Readers tell me frequently that they’re barely getting by. At the same time, they let me know that they spend $60 or even $100 per month on their phone bill. It doesn’t have to be this way.

Mrs. 1500 and I haven’t had a super-sized phone bill in a long time. We’ve been on Republic Wireless where we pay about $24 per month for each phone and the service has been fine.

Recently, I received an offer* to try Ting, another mobile phone service. I had used Ting before and enjoyed the service, but was hesitant to try it again because I didn’t think I’d be able to lower the expense. I was wrong.

The first thing I did was investigate Ting’s rates. With Ting, you pay for what you use. Their estimator tool told me that with normal usage, my bill would be about $24 per month.

While $24 is really great, it was the same as what I pay on Republic Wireless, so I wouldn’t save any money by switching. And then I did some research and discovered a cool hack…

Before I explain the hack, I’ll show you my numbers for my first month on Ting. With normal usage, my bill came out to $17.89, all taxes and fees included:

Here was my usage:

I hear you calling foul:

You used 0 minutes and sent 0 texts? This is nonsense. Go scratch!

Despite what the Ting dashboard shows, I text every day. And I made phone calls too. Lots of them. I just used Megabytes (data) for both. Google Voice is what makes this possible.

Hacking your Way to an Incredibly Cheap Phone Bill

Google Voice (GV) is a service that you should use regardless of your phone (works for both iPhone and Android), phone plan or provider. It turns your phone number into a virtual number that isn’t associated with any physical phone. You then configure the GV number to forward calls to other phone numbers. You only have to ever hand one phone number out for the rest of your life. If you’re at home, configure GV to ring your home phone. If you’re on the road, have it go to your cell phone. You can even forward to multiple phones at the same time.

GV has other nifty and worthwhile features; it will transcribe voice mails into emails, block unwanted callers, allow for call screening and other cool stuff. It’s awesome technology.

Best of all, it’s free to get a new GV number. And if you have an existing number you’d like to use, you may port it over for a one time fee of $20.

The other technology that makes this hack possible is Google Hangouts. Once you have a GV number, download the Google Hangouts app on your phone. You’ll then use Hangouts for all of your text messaging and phone calls. Phone calls and texts will be handled directly by Hangouts; you don’t even have to configure any forwarding.

When you use Hangout, everything you do on the phone goes over data, so you’ll never pay for minutes or texts. All calls in the United States and Canada are free. Again, you’re only paying for the data it costs to make the call and send the texts, not the calls or texts themselves.

The Fine Print (wait, there is none!)

Right now, the question you should ask is this:

How much data does it take to make a call?

The news gets even better. If you’re on wifi, you’ll use none of your plan’s data. And if you’re on the data network, it’s still cheaper to use data than it is to use cell minutes. 100 minutes of phone calls costs the same as 100MB of data, but a 1 minute call uses about 680KB. So, you get 147 minutes of calling over data for the same price as 100 minutes over the cell network. Win!

The next question you should ask:

This sounds too good to be true. Does Ting approve this? Is Ting going to boot me off once they realize what I’m doing?

The news is great here too. I know that Ting approves this hack because they wrote an article about it on the official company blog.

How cool is that?

How to Set This Up

Here are the basic steps: 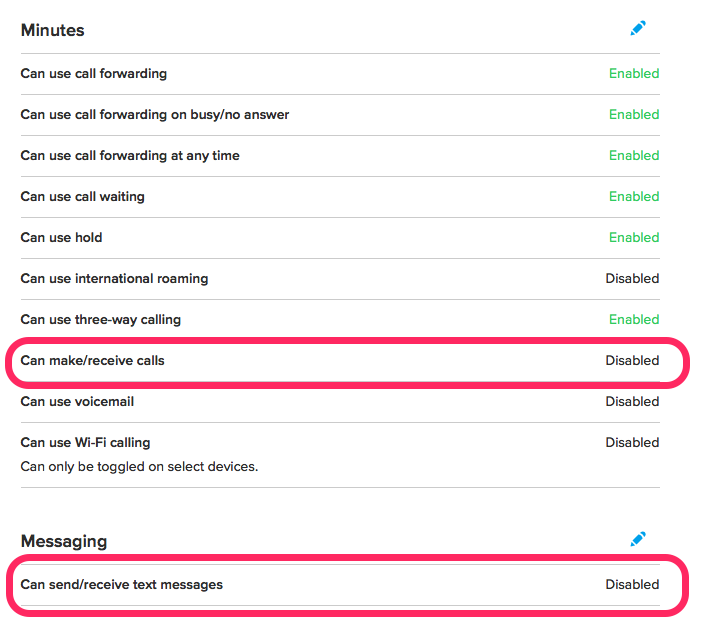 This isn’t complicated. You could set all of this up in an hour if you’re totally clueless. If you’re just a little tech savvy, you could do all of this in 10 minutes. However, if this is still too much for you, there are some other good reasons to choose Ting:

It Gets EVEN Better

My phone bill was $17.89 which is pretty great. I used about 310 megabytes of data, but wasn’t trying to conserve. There were a couple other apps that I used during my test period that gulped copious amounts of data. Did I really need to check the USA Today app while waiting to pick my children up at school? No!

Revisiting the data plan, it wouldn’t be difficult for me to keep my date usage to under 100MB which would bring my monthly bill down to about $10/month:

Other random notes to help you with your decision:

I’m switching my service from Republic Wireless to Ting permanently. The savings are too good to pass up. If you’re ready to try Ting, don’t forget to use this link to save $25.

*Full disclosure: I was provided a phone to test Ting. However, I paid for my SIM card and service.

**This is not an affiliate link. While you’ll save $25 when you sign up, I receive no compensation. I do this because I love you and want you to save money. Really. For the most part. Probably.