Joe over at Retire by 40 recently wrote about a potential Financial Independence TV show:

Last month, I had an opportunity to meet with a producer who was doing the groundwork for a reality show about financial independence. When I first heard about it, I immediately thought – this is going to be a snoozer… I love my life, but it is way too ordinary to watch on TV

I’m not so sure Joe is correct. Drama of all sorts goes down in the 1500 household.

I’ve written about the thermostat wars before. When the weather get cold, Mrs. 1500 likes to turn our home into an 1800 square foot sauna. I’m good with 68 while she prefers the “Nuclear Fusion” setting. Unfortunately, her same desire to sweat profusely extends to our autos.

True story: We were driving around in the middle of winter a while ago and it was so hot in the damn car that I stripped down to my underwear. My goal was to humiliate Mrs. 1500 into turning the heat down. This backfired because she couldn’t have cared less. All I got were puzzled looks from other drivers who wondered why the dude in the next car had no shirt on when it was 20 outside.

Mrs. 1500 note: I’m not sure how true this ‘true story’ actually is. I don’t remember Mr. 1500 stripped down to his underpants in a car, ever. Although once he did remove his shirt. It was about 20 outside, I was driving and in the shady part of the car, he was in the passenger seat, in the sunny part. Colorado’s sun is pretty strong, even in the winter…

Mr. 1500 rebuttal: It’s all true. It happened when we lived in Illinois (Mrs. 1500 has a poor memory) where the sun doesn’t appear for the 7 months of winter.

I’m content drinking water out of the faucet, but Mrs. 1500 will only drink the filtered stuff that comes out of the refrigerator. The charcoal filters* cost an obscene amount of money ($40!) and we’re supposed to replace them about every 3 months. The refrigerator even has an annoying little light that comes on to tell us that we need to replace the filter. Mrs. 1500 wants to obey the “change filter” light (they should have just made it a bunch of dollar signs) while I say: “Screw you refrigerator, I’ll get you a new filter once per year.”

Mrs. 1500 correction to an obvious lie: The filters are good for 6 months. They cost $40, there is a gentle reminder light which I find helpful. However, the first 2 years we lived with this refrigerator, we only changed the filter once.

A new battle recently erupted in our household, but first I must get to last week’s answers. I asked you about why you’re pursing Financial Independence:

Reader SJ and I have very similar brains:

I want none of the above. I’m not even asking for extra time for family as I feel I have a sufficient amount now. What I want from becoming FI is something that, in theory, could be had right now, or it might be something that FI can’t ever afford me: freedom from worry. I am always creating the worst disaster in my head. ..

FI won’t fix all my issues (clearly), but it will definitely give me more confidence that I can handle at least a few of my “worst case scenario” imaginings, like my husband passing away or either of us becoming too old or disabled to work.

As a community (I dare not call it a “movement”), people working towards FIRE appear to be some of the highest achieving, highest earning, highest innovating, highest aiming, thoughtful and intentional people in our society. We analyze, we deliberate, we plan, we execute, we demonstrate discipline and we have the internal fortitude to eschew peer pressure/social convention. Heck, this group might be considered “the 1%” if that were measured by a different set of criteria.

Here’s the interesting thing – despite being capable of attaining almost any pursuit we set ourselves to; none of us (at least that I’m aware of) believe that acquiring material possessions are a key factor to our happiness. As a group, we could have almost anything and yet we all chose to focus our primary efforts elsewhere.

At the risk of sounding like an elitist, I think that most of us FI people have our priorities in better order than the general populace. We’re a thoughtful, enlightened bunch.

Joe from Retire by 40 had the understatement of the century:

FI is awesome because you can do whatever you want at a more relaxed pace. Life is a lot better now that I don’t have to rush off to work at 7am every morning.

We also want to have more time and resources to give to others through volunteering and charities.

New Battle in the 1500 Household

I recently discovered the joy of rolling my laundry. Rolling clothes makes them fit much more efficiently in drawers and suitcases. I have about a zillion t-shirts and rolling brought order to my drawer:

I enthusiastically showed Mrs. 1500 my newly organized drawer and she was like:

She went back to whatever she was doing (probably turning the thermostat up to 90 behind my back). I was disappointed in her lack of enthusiasm, but rolled on.

A couple days later, I was doing the laundry when trouble broke out. I retrieved the clothes from the dryer, dumped them out on the bed and started rolling my shirts. I also rolled Mrs. 1500’s and the kids’ too. (Mrs. 1500 has to stop this ridiculousness right here: FIRST OFF, he did NOT retrieve the clothes from the dryer and dump them on the bed. Second, he rolled **maybe** two shirts – both mine – and then acted like he had cured cancer with his two rolled shirts. Every single one of my shirts is already folded. I don’t have time for this change-everything roll-it-up nonsense…) 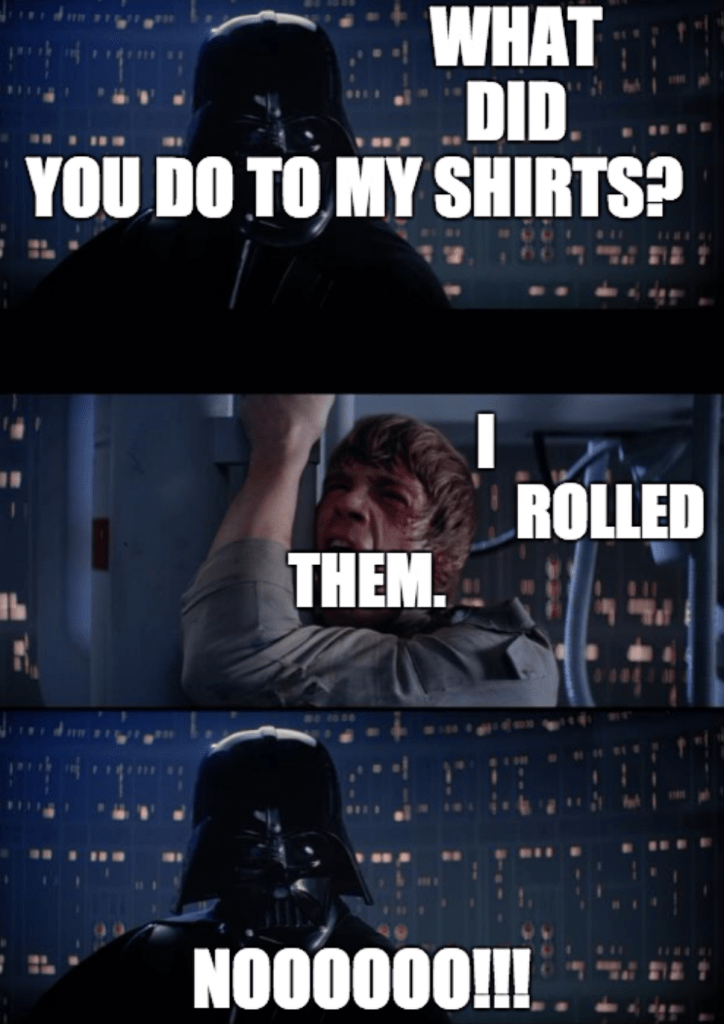 I was disappointed, but not surprised. In my extensive survey of women (2), I have found that they hate rolling. There must be something in that Y chromosome that enables men to appreciate and embrace this critical life-hack. I didn’t even put up a fight because there are more important battles:

And finally, we arrive at the questions:

*I’m convinced that these filters are a scam devised by some genius at the refrigerator company. It’s brilliant:

Instead of just selling a $1200 refrigerator once every 10 years, let’s sell filters (a canister filled with charcoal) that cost $160 every year!