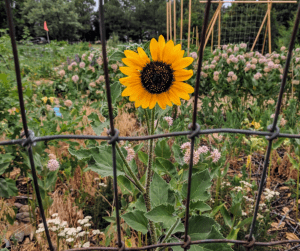 I walk a lot, especially early in the mornings and late at night when it’s not hot. I’ve noticed some danger signs lately in my rapidly gentrifying neighborhood:

But, I like my neighborhood and see good examples too:

From my judgmental tone, you can tell I’m more like the landlord or 80 years-olds than the folks who have ice cream delivered to their home.

Finding my tribe (and seeing what you want to see)

Finding my tribe wasn’t always easy. I don’t have much in common with folks who hire an army of people to serve them so they can watch more TV. That’s not my style and I struggle finding common ground.

And lifestyle inflation is dangerous. Don’t get too comfortable when times are good or else you won’t be ready when they end. You don’t want to be foreclosed on when the economy takes it’s next dump.

Instead, figure out how to live right and  don’t change no matter how much money you end up with. Do you want to control money or do you want money to control you?

And part (most?) of the problem is me. I don’t have much time to watch TV or keep up with gossip, so it can be hard to relate to others. I’m also socially awkward and it can take a while for me to warm up to people (years even!). Throw in some insecurity and you have a recipe for someone who may be destined to live in the middle of a forest with a big beard and crazy hair. I don’t want this:

And some of it comes across the wrong way. I’ve been called me an elitist, but again, the problem is mostly me.

So yeah, the social part can be hard. The fancy folks are easy to find. They advertise their lifestyle with new cars and servants. The frugal folks fly under the radar. The guy with the old Toyota could be poor or a stealth millionaire (most wealth is stealth).

Luckily, we have the internet. A couple weekends ago, I went to a party where most of us knew each other from the Mr. Mustache forums or blogs. We all brought food and beer and shared fun conversation. Potlucks are my style.

I want to know about your tribe, but first, we must get to the question from last week:

Can Frugality and Minimalism Coexist?

I think a truly minimalist life style is a luxury. If you only buy what you need as you need it, you are probably always paying full price. You also might be paying more for something that comes packaged in a smaller quantity.

I think this is interesting because owing a huge home filled with stuff is considered luxurious by some. Not to me though!

We are definitely more into the minimalism side of things. We only buy what we need, and with the big items we look high quality and low(er) prices. With our furniture we bought design items, but for more than half the price off. We can last a decade with those items.

For me it’s not only about saving money, but to not own more than you need. We do make some exceptions for the things that add true value of makes us happy, like vacations.

I don’t identify as a minimalist. I think it’s a passing fad that, for the most part, people aren’t able to adhere to and find benefit from. In some ways I see it as forced deprivation.

Frugality sometimes results in buying things because they are on sale and you THINK you will use it and you never do and the money you spent and the deal-finding time is wasted. Not to mention the wasted resources. I think it dislike that most of all. Ugh.

Mrs. 1500’s favorite place at the grocery store is the clearance section. Unfortunately, we end up throwing lots of food away because we have so much of it, it gets lost in the chaos and goes bad:

We have managed to purge a lot of stuff, re gift it or simply sell it off and there is a immense sense of relief every time a box of stuff moves out from our house. We have reduced stuff we keep in freezer and that makes me feel amazing, so I understand where you are coming from.

I can relate because we’ve been purging too. In the past two months, we’ve made about 10 trips to local charities to donate random stuff. And we probably have 10-20 carloads more to go. We moved from a home that was almost 5000 square feet into our current home of around 1850. The 5000 square foot home was filled and we brought most of it with us. Not good.

We have a lot left to do, but it feels wonderful to finally be paring it down. All of that stuff takes a lot of time and we have none to spare.

I’m not sure where I land yet on the spectrum of frugality and minimalism, but I agree that they’re different. Perhaps my ultimate goal isn’t either. Maybe my goal is simplicity which lies somewhere in the middle.

I’ve found my tribe. It took a while, but I’m thrilled to have a group of friends and neighbors who we enjoy spending time with.