On last week’s episode of The BiggerPockets Money Podcast, we interviewed Anthony Ongaro from BreakTheTwitch. Mr. 1500 met him when he spoke at Camp FI Midwest, and really liked his story.

Anthony’s episode focused on minimalism, as it pertains to financial independence. One thing in particular that really resonated with me was his take on the stuff you already have, regarding the cost. He quoted Seth Godin:

“Everything in your life is a gift from your past self, and it is up to you today to choose if you’d like to accept them.”

“That money is already gone, unless you sell it, it’s never coming back.”

My big thing is:

“I spent money on this, so I can’t just throw it away.”

Mr. 1500 is supportive of me getting rid of it, even though I think it’s wasteful to just toss. (We don’t just toss, we take to the Goodwill so someone else can get use out of it.)

Then I got a text from Mrs. Waffles on Wednesday, asking if I’d like to take part in a Minimalism Challenge during December.

The premise is simple. You get rid of things every day. You start small, on the first day, you get rid of one thing, on day two, you get rid of two things. And so on and so forth until the end of the month, which is Day 31 for December, and I’ll be getting rid of 31 things on that day.

But if you add it up all up, you’re actually removing 496 items from your house during a 31-day month. (Spoiler Alert: December has 31 days. Jump in with both feet, right?)

I started Day One with this Frog Enclosure, that we’ve owned for at least 6 years, and used exactly zero times. 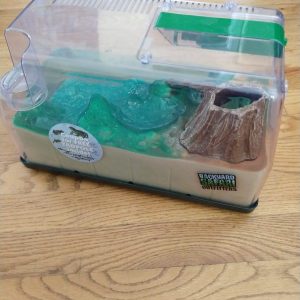 And on Day Two, we got rid of a pair of gloves that don’t fit any of the hands in our house any longer, and a really creepy doll. 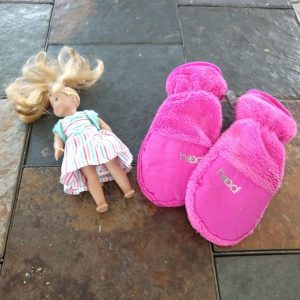 Want to join us?

(Here’s her article about the Minimalist Challenge.)