Quick note: Just like last year, we’ll be giving away 2 sets of Buffett/Munger rubber ducks. Tune in on Monday for the ducky details! Hint: Start thinking about who has positively influenced your money decisions… 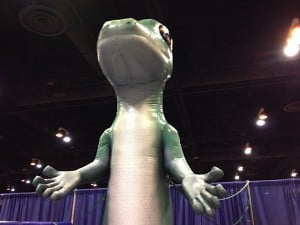 Berkshire Hathaway is Warren Buffett and Charlie Munger’s holding company. Anyone can buy a share, well maybe a B share (as of this writing, A shares cost $190,000 (each!) while B shares go for $127). Berkshire has generated tremendous returns for over half a century, making many folks wealthy. Berkshire’s annual meeting is the first weekend of May every year and any shareholder can attend. Last year was our first and we went again this year.

The very idea of a shareholder meeting puts many to sleep. However, this is no ordinary meeting. It’s a big party of sorts. Where else can you spend a weekend with 40,000 others who travel from all over the world to talk about making money? Buffett is regarded as a rock star and is mobbed. The energy level is high and people are thrilled to see Buffett and Munger in person.

The best part of the meeting is that you have a chance to ask Buffett and Munger questions. Just drop your name in a box. If you’re chosen, you get to step up to the microphone and talk to Buffett.

Airbnb to the rescue

As you might expect, hotels jack up the prices for the Berkshire weekend. We were horrified to see hotels wanting $300/night with 3 night minimum stays. We hit up Airbnb and found a place 2 miles south of the event for $40/night.

We were more than happy with our first Airbnb experience. It wasn’t the 4 Seasons, but it was a clean place with a comfortable bed. All we did was sleep there and all hotels look the same with your eyes closed. I’ll definitely check out Airbnb for future travel needs. 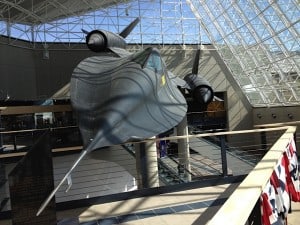 We managed to find a cheap car rental, so on Friday, we jumped in our little Chevy Cruze and visited the Strategic Air Command museum. Since this post is about money and not flying things, I won’t drone on with airplane talk. However, I have to mention that they have an SR-71. Reading about this amazing machine blew my mind as a kid. Seeing one in person was incredible! 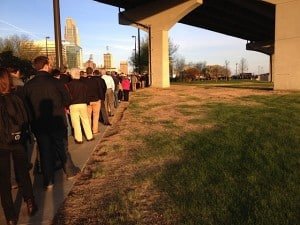 The meeting always takes place on Saturday. The doors open at 7am, so we got there at 6:45am to get a good seat. We massively underestimated everyone else who had the same idea. The line already had 1000s of folks in it. However, the PoPs came to the rescue, saving us a decent seat and sparing us from the top of the upper deck again.

We put our stuff down and headed to the exhibition hall. The hall is where many of Berkshire’s companies showcase their businesses and also sell Berkshire related stuff. I walked into the hall and saw a huge mob of people in one corner of the room. That could only mean one thing, Warren was throwing newspapers.

Warren delivered papers as a youngster, so he has a contest every year at the meeting. First, he throws a newspaper at a target. Then, you have the chance to challenge him. Beat him and you get an ice cream bar (Dairy Queen is owned by Berkshire). I snapped a picture and moved on. 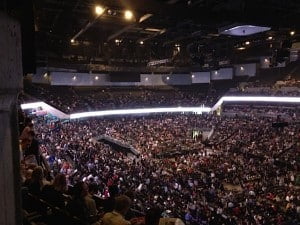 At 8:30, the meeting starts. First, there is a movie that lasts about an hour. The movie has humorous skits and also showcases some of Berkshire’s brands. Paul Anka and Warren Buffett performed their own version of My Way in part of it.

After the movie, it’s question time. Questioners include the audience and journalists. Some of the questions dig deep into specifics on particular business units of Berkshire. Others are more general. Some are terrible*. Here are some of my favorite quotes from the meeting.

Talking about the financial crisis: 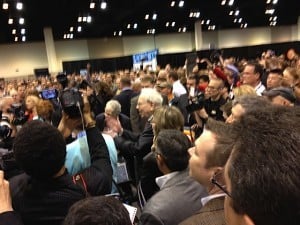 Of course Buffett was talking about putting cash to work to take advantage of the many bargains and opportunities that presented themselves in the crisis.

Buffett: Pay no attention to quarterly or even annual results.

Play the long game. There will be periods of ridiculous exuberance and there will be recessions. Staying in the game long term is the only way to go.

When evaluating an investment, it’s not all about numbers and charts. Munger is famous for studying a company from all different facets to understand competitive advantages.

Munger: I’m not a genius. What I needed to get ahead was to compete with idiots. Luckily, there is a large supply.

I love Munger’s little quips and deadpan delivery. He shoots from the hip; no filter on this man.

Munger: When I look out at the audience, I see a bunch of understated frugal people. We collect you people.

This one surprised me a bit. Munger is a curmudgeon of very few words. This is the closest I’ve ever heard him being emotional in any way.

There is much more to say. Two of my favorite questions were about frugality and financial education in the United States. However, I’ve blabbed on for long enough today. Stay tuned…

This year, we attended the meeting with Mr. and Mrs. PoP of Planting Our Pennies. We really hope they come again next year and we also hope to see more of you there as well. I’ve already heard from a couple readers who have mentioned that they will be there in 2015. Do it. Buffett is 83 and Munger is 90. They are no spring chickens, errr ducks.

*One member of the audience asked Buffett if he’d ever consider buying a sports team. Anyone who knows anything about Buffett knows that wouldn’t happen. Ever. Munger refused to even say a word when prompted.