I’ve been meaning to write more frequent book reports, but then I got that new job and life sort of takes over. Recently, I received a review copy of a book that was written by an acquaintance of mine, and to be honest, I wasn’t sure how much I was going to get out of it. 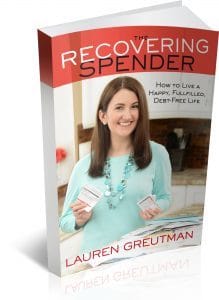 I already live a happy, fulfilled, debt-free life. But I have read a lot from her, and she’s a smart woman. We have similar views on many things, and we’re both moms. So I signed up to be part of her book launch, which included receiving a copy of her book.

It arrived, and I put it aside. “I’ll get to it when I have a chance.” But then I woke up early a couple of days after it came, and I picked it up.

She makes a pretty powerful statement in her Introduction.

“I have tried it all – the cheats, the quick fixes – but they all failed me. Why? Because I wasn’t willing to do the hard work that it takes to get it done the right way, which is often the harder way.”

Read that again. “…because I wasn’t willing to do the hard work…”

If you aren’t willing to do the hard work, you aren’t going to see the same results that Lauren had.

If you aren’t willing to do the hard work, you shouldn’t buy the book. Wait until you’re ready to do the work.

Spending IS an Addiction

She starts off the first chapter talking about her “Spending Addiction.” She describes spending in much the same way an alcoholic would describe vodka or a heroin addict would describe smack.

I was actually really surprised to read about some of the big financial mistakes she made. Lauren Greutman and I are in several of the same groups on Facebook, mainly for Financial Media. And while there are many other writers in our groups who have debt, Lauren has always seemed to have her stuff together.

Of course, that’s easy for me to armchair-quarterback from the benefit of my age (let’s say the other side of 40) when it was her 25-year-old self that I was reading about. I wasn’t great with money when I was 25, either.

By the end of the first chapter, I was making a list of all the people in my life who NEED to read this book.

As you know, we’re winding down a home remodel, and I have a lot of things demanding my time, but I found myself looking for ways to read a chapter here and a chapter there. I couldn’t put this book down, it spoke to me in such a strong way.

Lauren tells her story with such ease. I think the reason her story is so compelling is because I know someone exactly like her. Actually, I know a lot of 25-year-old Laurens.

Lauren says later in the book that she finally figured out that something other than money was more important than spending. (No spoilers here.) But she had to get to that point, before she could fix her situation.

“When the pain of staying in debt is greater than the pain of changing your spending habits, then you will make the changes needed to get out of debt.”

You won’t make any changes, until you are ready to make changes. Period.

This applies to so many different things in life. Addiction for sure. Money problems in general. Heck, p-r-o-b-l-e-m-s in general.

Want a cleaner house? When the pain of living in clutter is greater than the pain of changing your habits, then you will make the changes needed to get rid of the mess.

The first portion of The Recovering Spender is Lauren’s story of how she accumulated her debt. Her painfully honest story should resonate with others in similar positions. In fact, it might actually be helpful to read about someone who made the same or similar money mistakes. She spent freely, knowing she didn’t have the money to cover the bills. She hid purchases from her husband, and lied about how much she spent.

The second portion of The Recovering Spender is similar to the 12-step program in Alcoholic’s Anonymous – and with good reason. Alcoholism is an addiction, and so is overspending.

In many ways, overspending may be harder to conquer because you are constantly bombarded with advertisements for this or that on TV, in newspapers and magazines, online, and even as you drive down the road. The urge to spend is every bit as strong as the urge to drink, but you don’t need to drink alcohol. You can live your life just fine without ever drinking another drop.

But you still have to spend money. You need groceries and clothing. Your children need shoes, toys and books. You have to pay your mortgage, utility bills and medical expenses. Money has to leave your pockets frequently.

Lauren walks you through each of her 12 steps to spender-recovery in the second half of the book. She provides worksheets at the very end to help you get started, as well.

But the most powerful part of the book is Chapter 26, The Credit Card Experiment.

Lauren went through the pain of getting out of debt, and the book details her journey over the last 10 years or so, coming to terms with her spending addiction, figuring it out, and paying off more than $40,000.

But the battle is never over

So she tested herself with a credit card. One of those spend-$3,000-in-three-months to get travel rewards points credit cards. Her goal was to get some free travel for her family.

She spent the $3,000 in three months to qualify, and paid it off so she didn’t have finance charges. But she also discovered that she spent an additional $2,000 that she couldn’t really account for.

She had thought she was cured, but realized, “…I will never ‘arrive’ at being good with money. I will forever be in ‘recovery’ as a spender, and one of the things that I need to continue to do to keep myself in recovery is to stay within my fence. …”

Are you struggling with money? “When the pain of staying in debt is greater than the pain of changing your spending habits, then you will make the changes needed to get out of debt.”

When the pain of staying in debt is greater than the pain of changing your spending habits, read this book. When you’re willing to do the hard work it will take to get out of debt, make one last purchase, and buy The Recovering Spender, by Lauren Greutman.