This week, I take a break from my normal posts to show you the bathroom I’m remodeling. I’m going to try to finish the entire thing in 5 days. Today, I tell you about day 4.

Have you ever had one of those days where you worked your ass off, but at the end of the day, you have no idea what you accomplished? Today felt just like that.

We actually accomplished a lot, but it didn’t look or feel like it. We fought the shower enclosure for a long time, but it’s now installed and plumbed, except for the finish plumbing parts.

Mrs. 1500 went on her secret mission today, which I’m not allowed to discuss. However, I must report that it went well.

In any case, I was on my own for a good part of the day, but at least I could blast some good music (Hello Pantera!) which she despises.

I finally completed the plumbing part of the project including sweating copper which I haven’t done in at least a decade. I took Income Surfer’s advice from the comments a couple days ago and used lots and lots of flux. Everything went great, no leaks! Thanks Income Surfer!!

Let me tell you, I was very excited that all of my soldered joints held water: 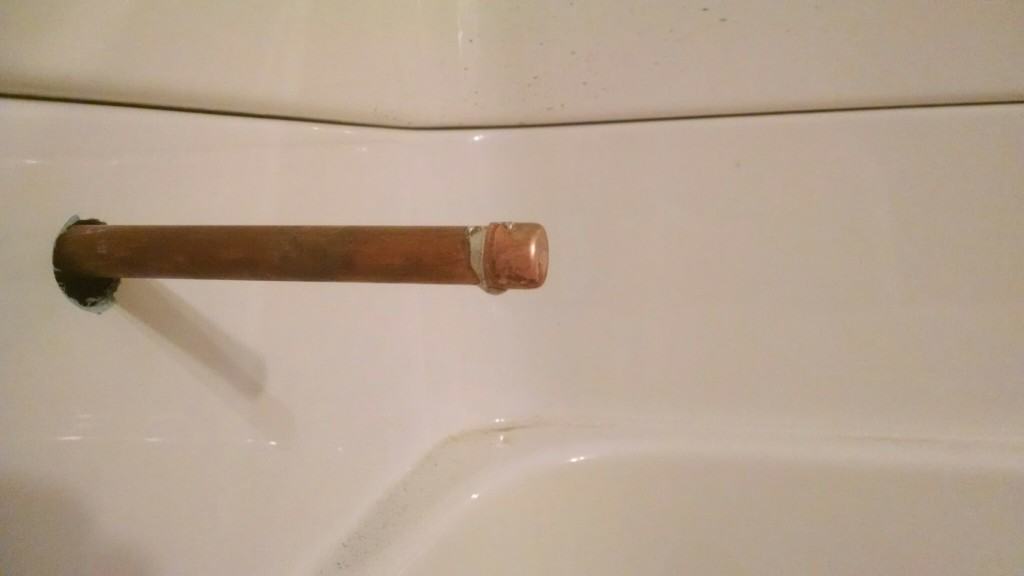 When work accidents give you blood, make smiley faces!

A couple minutes later, I was OK and the project went on. No big deal.

Tomorrow is the final day of this experiment. I am going to try to do the following:

Tune in tomorrow night to see if I’m being way too ambitious once again.

Too many things got in the way. I didn’t account for all of the issues this old house had. Nothing is straight, so I had to do a lot of fixing. More of the floor was rotted out than I thought. I didn’t expect that I’d need to do as much plumbing as I ended up doing. The shower enclosure was a challenge. (Mrs. 1500 note: I hate plumbing. I hate hate hate plumbing. It ALWAYS leaks the first time you turn on the water. ALWAYS. I don’t possess the strength to tighten it to the point of no leaks. The wrench always slips, and now I have a new collection of bruises and scrapes all over my hands. I hate plumbing.)

However, we will be close and while I’m a bit disappointed, life is still good. I should be able to be mostly finished by Sunday. I’ll be sure to show you the finished product in a week or so.