Today’s dose of gratitude comes from My Son’s Father(MSF). MSF is quickly making a name for himself with his awesome Lego skills: 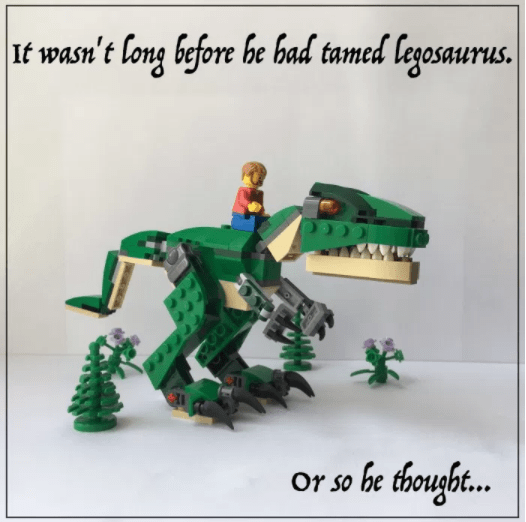 As a father of two young children, I can totally relate to MSF’s post. Kids tend to be selfish creatures, so instilling a mindset of gratitude isn’t easy. I like MSF’s approach so much that I’m trying it in my own household.

Take it away MSF!

Gratitude is a muscle. The more you use it the stronger it becomes. However, when you don’t use it, atrophy sets in. When that happens, less desirable mindsets can lay claim to your perspective.

Sometime last year I noticed this happening with my two boys. A few of their comments betrayed a less than impressive outlook: they were becoming ungrateful. As if that wasn’t bad enough, I also heard a hint of entitlement.

Entitlement? Not in my house!

Action needed to be taken, so I began mentally preparing a twelve-point lecture about how good they have it (the tone of which was eerily similar to Mrs. BITA’s letter to herself). After a two hour lecture they’d surely see the error of their ways, right?

As fate would have it, around this time I had a conversation with a friend about gratitude and appreciation. Specifically we were discussing our unique ability to train our brains to see the world from an appreciative point of view.

That’s when my friend shared that he’d been taking 5 minutes each morning to practice gratitude. For five minutes, he would reflect upon the things in his life that he was grateful for. And with that, an idea was born.

The very next morning, I added a new agenda item to the morning routine with my kids. After breakfast was eaten, showers were taken, teeth were brushed, and backpacks were packed, I sat my boys down. I explained that each morning we’d take a few minutes before leaving the house to each share something we are appreciative of.

And for the past 8 months or so, four mornings out of the week (my wife takes them in on the 5th morning), my boys and I have been practicing gratitude.

As you might imagine the results have been mixed.

Initially they were enthusiastic about this new addition to the routine. However, after the newness wore off, so did the excitement. It became a battle to get them to express gratitude for anything.

I wrestled with forcing them to come up with something to be appreciative of, but that just didn’t feel like it was in the spirit of the exercise. So each morning, I let them decide. If they have something they want to be grateful for that day, great; if not, that’s fine too. Some days they don’t want to participate, but most mornings they come up with something.

Then there is the obstacle of dealing with 6 & 7-year-olds. Many mornings this practice devolves into a giggling fit. And most mornings they are simply appreciative for whatever they happen to be looking at.

“I’m appreciative of…” looks around the room and spots a toy basketball “…basketballs.”

Not exactly inspiring, but neither is lifting a 5-pound weight. However, if you do it enough times, the muscle will get stronger.

I have to admit that I occasionally do get behind the lectern and point out to them that many kids don’t have “basketballs” (or whatever other toy they identified that day) to play with. I try to keep the message short and simple, but I have seen their eyes gloss over once or twice.

Then there was the week that they were both grateful for “air to breath” for the whole week. It amused me the first day, but by the end of the week I was ready to be done.

Occasionally I’d get a moment that told me that this exercise wasn’t futile. Sometimes it was sweet: “I’m appreciative of having a daddy that loves me”. Awwww.

Other times it was unexpectedly profound: “I’m appreciative of being able to go to a school where I can learn”. That was a particularly proud morning.

What about the Entitlement?

The outcome that mattered most to me was ridding them of any emerging sense of entitlement. On that front, I’d say mission accomplished. Don’t get me wrong, they still have their moments of acting like kids, but overall they are far less demanding and assumptive and generally more respectful and appreciative.

I’m not sure I can credit the practice of gratitude completely for this shift, but it has certainly helped. It has been a daily reminder that they have it pretty good and all those things they had been taking for granted are not guaranteed. I hope they will continue to build their gratitude muscle long after they’ve outgrown these pow wows with their dad.

While this exercise was started as a tool to teach my boys to live with gratitude, it may have had just as big of an impact on me.

It forced me to take five minutes out of a chaotic morning routine to focus on the things that matter. My frustrations with cajoling my kids through our morning activities disappear when we stopped and focus on what we appreciate.

Too often throughout our time together, I found myself “correcting” their undesirable behaviors. However, once we started this practice of appreciation, I became more encouraging of their positive behaviors: “I’m appreciative of how well you listened this morning.”

It is also a great reminder to myself of just how fortunate I am-for my kids, for having a job that allows me to spend as much time with them as I do, and for having an amazing partner in my wife.

The list literally goes on and on. I challenge myself to come up with at least one new thing to be appreciative of each morning. It keeps the practice fresh and prevents it from becoming a cliché.

This has easily become the best part of my morning. Even when my boys are being silly, I find myself being appreciative rather than annoyed. If the worst thing in my life is a house filled with laughter, my life is pretty great. And now that I’m being intentional about it, I’m reminded of just how great my life is, each and every morning.

Thanks so much for the post today MSF! I’ll let you know how my experiment goes.