I usually keep my distance from doughnuts, but I’ve heard that they’re a big deal in Portland where I’ll be for spring break. There are two spots that I keep reading about; Voodoo and Blue Star. I have decided that I’ll let my guard down and try a doughnut from each. When in Rome and all that sh*t. And to maximize my experience, I decided to do a little research ahead of time. First, I went to Blue Star’s site:

These three all look spectacular (how am I going to choose?): 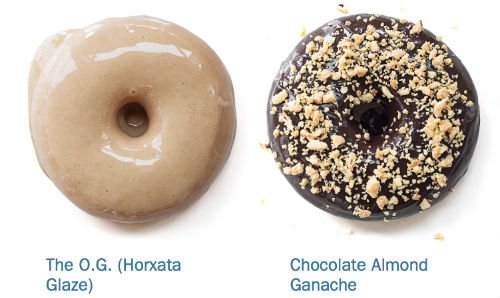 And then, I went over to Voodoo’s site. These three are all innocent and look good:

And these two look fantastic: 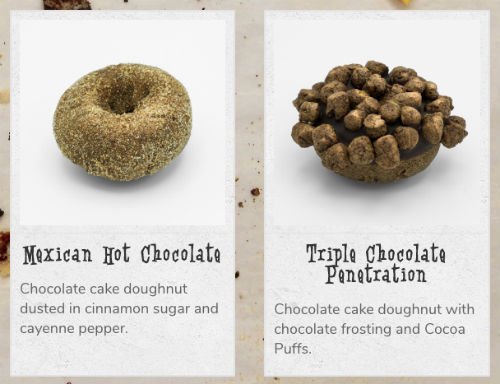 I scrolled a little more and the trouble started: 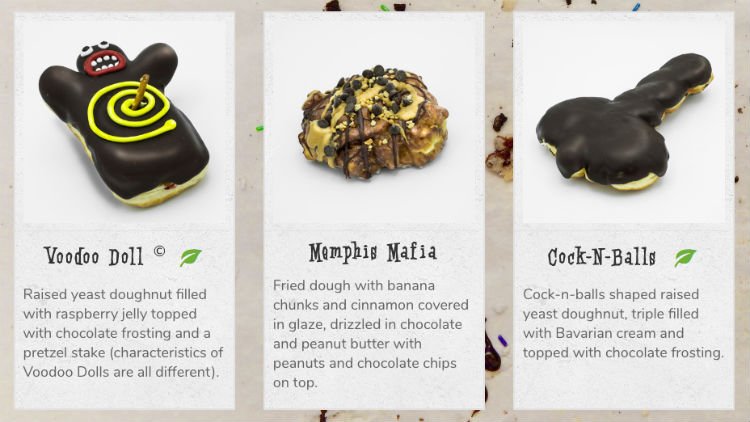 The one in the middle looks interesting, but what do I do about Voodoo Doll and Cock-N-Balls?

Is that a doughnut in your pocket or are you just happy to see me?

And then there was this one: 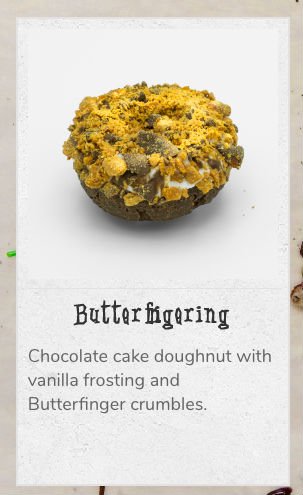 Do I let my daughters learn about male anatomy in a doughnut shop? We usually let our kids order their own food, but what do I do here?

May I please have a Butterfingering?

It’s all so so so VERY wrong.

Besides all of that, I noticed that Voodoo doesn’t have any doughnut representations of the female anatomy. Or, maybe I’m wrong here. Most doughnuts have a… Oh, never mind…

I’m really sorry for this post if you’re reading it at work. Unless you happen to work at Voodoo Doughnuts; it would probably be OK then…

At some point, I learned that the half-marathon has Peeps on the course. Who needs Gatorade when you can have sugar in the form of fluorescent, deformed animals? 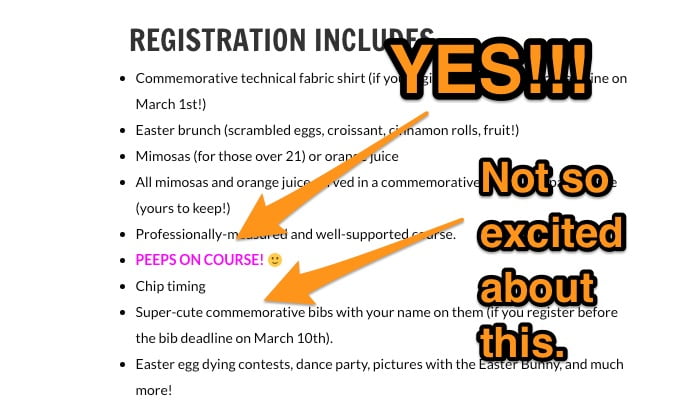 I love Peeps and always have. I also like beer and also found this:

If there are Peeps on the course, I will eat Peeps. If there is beer at the end of the course, I will drink beer. Hell, I’m going to put Peeps in my beer and drink that too. You wish I was kidding here, but I’m not. It. Will. Happen.

Oh yeah, I guess I have to run too. Peeps and beer are fun. Running is the opposite of fun. I tried to think of ways to make the half-marathon less miserable, but none of my ideas were any good:

My response: Can they at least be Cadbury Eggs?

Just when I thought all hope was lost, I came up with something. I won’t dress up like a Peep, but that doesn’t mean that I can’t adorn myself with them. Here is how I’m going to run the race: 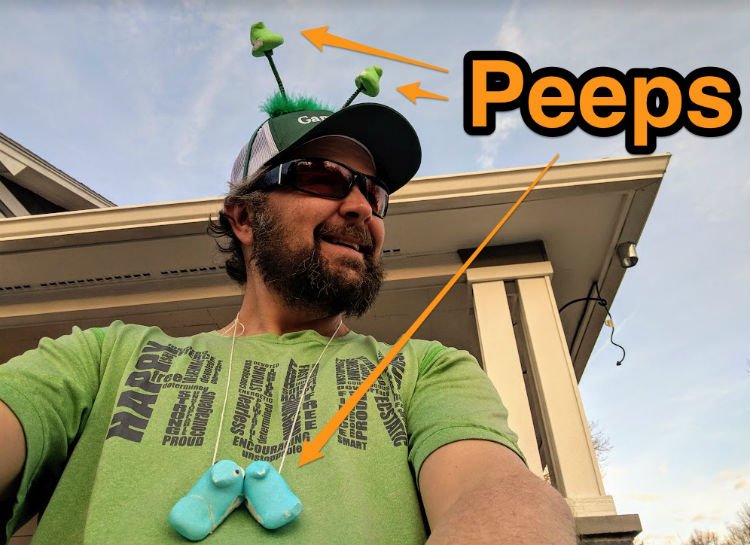 My Peepl necklace is a little pathetic. Why only two? I had yellow Peeps too. Until I didn’t. 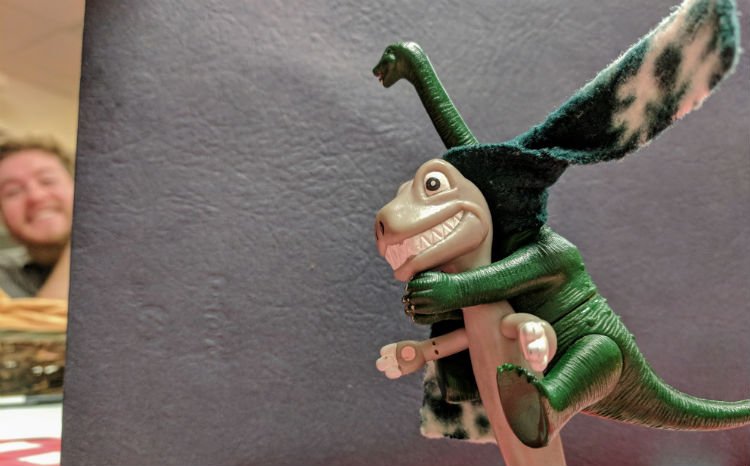 In case you’re dense, Spendosaurus is the villainous one. Or so I thought.

Frugalsaurus must have felt threatened by my incessant Peep talk. I’m sure he didn’t appreciate the 3,837 Peeps laying around the house either. I came home to a scene straight out of a Stephen King novel: 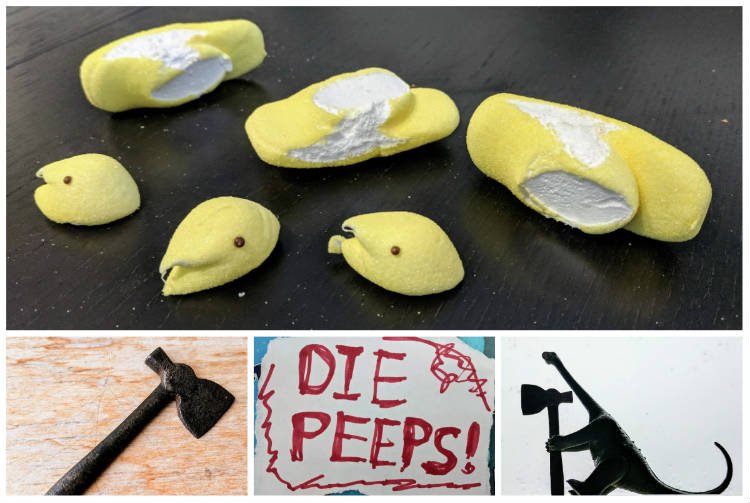 I was supposed to have a 10-mile run this week. However, I made a bad decision that destroyed all hopes of that. On the day I was supposed to run 10 miles, I had only ingested Soylent. Around mile 7, my stomach started feeling weird. At mile 8.5, it went into a full-on revolt. I clenched up (TMI ALERT!!!) and got home as fast as I could. My 10-mile day became a 9-mile day.

I only have two more runs before the big race. I’ll put in a 4-mile day on Saturday and then a 3-miler on Monday. I’ll take the rest of the week to rest. Almost there.

We leave for Portland tomorrow. It’s the girls’ spring break, so we’re going to fool around in the Pacific Northwest for the week. If anyone is in Portland and would like to meet:

The 2018 edition of Chautauqua is now completely sold out. All hope is not lost though: