I’m training for a half-marathon on 3/31. Running is not my strength. I’m a bad, bad runner. But, pushing comfort zones is how we get better in life, so I persist.

Every Friday, I publish an update on my training. This is Update #9.

My training wasn’t at the point where I hoped it would be, so I did the unthinkable. Yes, it’s true:

I cut out beer. And by beer, I mean all alcohol.

My last alcoholic beverage was in February on 2/25.

Amazing things started to happen after I stopped:

OK, so I made the last three up. I can dream though, can’t I? Ha, who am I kidding? I can’t even get my children to stop fighting for longer than 5 minutes. But I digress.

Not drinking has felt pretty good. My consumption was mostly confined to weekends, so it’s nice to get on the scale Monday morning and not see a couple pounds of beer bloat.

I plan to stay mostly dry until the half-marathon. I’ll make exceptions for a meeting next week and a party we’re hosting on the 17th.

In a poor decision, I announced in Running Update #2 that I wouldn’t cut my hair until after the race. I don’t like hair. It just gets in the way, so I usually shave it off. This is how I usually look:

The situation is deteriorating rapidly. My hair has a mind of its own.When it gets long, it goes nuts. I’m forced to wear hats 24/7 to hide the chaos. Here is what I look like now: 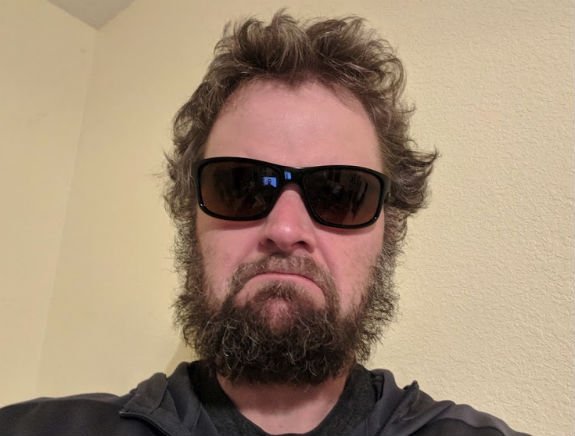 Mrs. 1500 hates it. She announced this tonight:

We’re bringing the clippers to Portland so we can shave your head as soon as the race is over!

My children give me strange looks and keep their distance in public. Babies cry and small animals run away. I’m sure I’ll be chosen for the “random” security screening at the airport.

Someone suggested that I give hair conditioner a try. I’ll do that soon.

I Can Do This!

Confession: Yes, I’m coming to Portland for a half-marathon, but I never actually thought I would run it. I knew I would finish, but I just assumed that I’d spend most of the race walking or limping while moaning/whining/crying pathetically.

I’m not an athlete in any way, shape or form. I’m clumsy and uncoordinated. I’ve never had cardiovascular endurance. And as a kid, my legs weren’t right and I had to wear Forrest Gump-like braces for a couple years. I hated those f***ing things. My mother told me that I’d have knee issues my whole life. After a couple years, the braces came off, but knee issues never materialized (except a torn meniscus but that’s unrelated). Woot!

Anyway, running has always been challenging. A year ago, I couldn’t run a mile. My first run longer than 3 miles took place late last year. And this week, I ran my longest yet, 9 miles. And something wonderful happened on that 9-mile day.

When I do my weekly long run, I’ve been very conservative. And by conservative, I mean slow. I do 11-minute miles. And tonight, most of my run was no different. However, at mile 7, I was feeling great. This was very strange because I usually feel the opposite of great while running. I decided to turn it up for the last 2 miles and finished them each in under 10 minutes. And I still felt like I had lots of gas in the tank.

It felt amazing. It felt like a breakthrough. For the first time since Mr. WoW suggested a half-marathon back in December, I feel like I can do this. And the feeling is incredible.