“Most people work just hard enough not to get fired and get paid just enough money not to quit.” – George Carlin 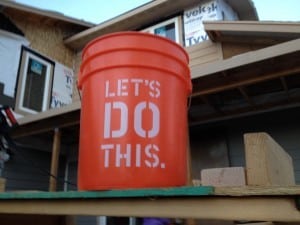 I saw this quote on The Simple Dollar recently and unfortunately, it really hits home. We have a big remodel going on and I try to do as much as I can myself. I’ve already run the electricity and plumbing. Soon, I’ll be painting, tiling, hanging doors and putting up all of the finish trim. However, I can’t do it all myself and in almost every case, the people who I hire are a disappointment.

I don’t operate like any of these people. If you’re not going to do it right, even if it’s a lowly task like scrubbing the toilet, don’t bother with it at all. Do your best at everything in life. At the end of the day, you have to live with yourself.

All of this got me thinking about my own principles and how they helped me get ahead.

How to Kick Ass at Work

Work your ass off, even for a brief time: I started my career as a mainframe programmer right around the Y2K crisis. I had my pick of jobs, but I knew it would be short-lived. The Y2K code would get fixed and one day, there would be too many of us. I needed a new skill.

My solution was to retrain myself. I spent about 800 hours of my own time picking up a new skill-set and getting a certification* to prove it. I was quickly promoted. I continued to bust my butt until I got where I needed to be with work and income. I changed jobs twice. It was a couple years of very hard work, but it has set me ahead at least a decade. Totally worth it. Note: Do this before you have kids and a family. Family comes before everything.

If you’re not appreciated, get out: At a past job, there were two fellow software developers who couldn’t have been more different. One worked his ass off. He stayed long hours and wrote much of the critical code for the system. He went above and beyond what was asked of him and never complained. The other developer was really good at shooting the sh*t with management. He may not have been much of a coder, but he knew how to talk and talk he did. Guess who got promoted? It wasn’t the first guy. This was the signal that I needed to leave. And I did.

Chuck’s entire life was tied up in the job. He ate lunch with his co-workers. He played softball with them on the company softball team. He went out for drinks with them afterwards. They all went downtown together on weekends.

Layoff day came and I watched with a lump in the throat as Chuck was called down to The Room. Afterwards, his manager let him come back to his cube to clean it out and he wasn’t just in tears, but full-on sobbing. It was very sad and uncomfortable. His life was destroyed in 10 minutes.

It’s great if you like your job and fellow co-workers, but don’t build your life around them.

Remember names: At one job interview, the interviewer introduced himself and then announced that he was going to ‘ask me a bunch of tough technical questions.’ He did and I aced it. I was thrilled with my performance. He then announced that he had one more question for me. My smug self thought, ‘Throw it at me! I just killed all the other ones.’ Here is what it was:

What is my name?

I didn’t have a clue what his name was and felt like a complete idiot.

How many people have ever declared that they’re good with names? No one says that! So, when a new co-worker introduces himself, remember that name and use it next time you see him. He’ll probably have forgotten yours and you’ll instantly find yourself in a position of power.

Never stop learning, have an open mind and stay curious: New challenges keep the mind fresh. Be mindful of ruts. The deeper they get, the harder it will be to climb out. Recognize when you’re in one and make a change.

Go above and beyond: Let’s take a look at that quote one more time:

“Most people work just hard enough not to get fired and get paid just enough money not to quit.”

This is sad, but it’s also an advantage for you. I really believe that it doesn’t take much to stand out:

You only live once. Do it right.

*I think that the value of technical certifications is dubious at best, but for some reason, the management at this company thought they were great.