This post was supposed to be about mushy Thanksgiving stuff and I’ll get to that, but something amazing happened on Wednesday that I must talk about first. I joined the Double-Comma Club: 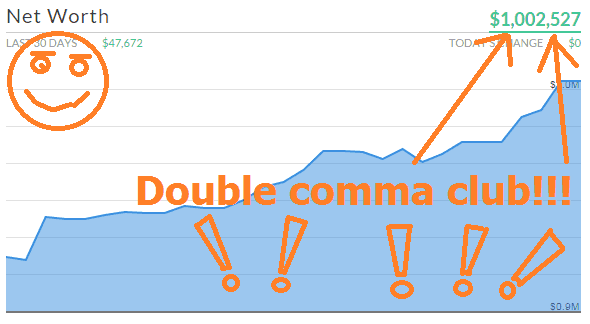 Let’s go back in time for a moment

Sometime in my early 30s, I had a random thought that I’ve never told anyone. That thought was this:

It would be awesome to be a millionaire at 40.

However, I quickly dismissed it. Everyone in my family struggled with money and a million dollars was a ridiculous thought. Growing up with no money affects you in strange ways. For one, I had no role models. When my mother was about 50, she bragged to me that she and my father had $25,000 saved up for retirement. At that time, I didn’t know much about money, but I did know that $25,000 was not good for someone approaching retirement age. Sigh.

Shortly after my mother’s proclamation, I started saving aggressively. The snowball was small at first. Then, it started to grow. And grow. And grow. Now, here I am at 1 million at 40 years of age, one day shy of 41. That was a close one.

First and foremost, this feels pretty awesome. The main point of this blog was to make myself publicly accountable. Luckily, I had the tailwinds of the markets behind me, so I haven’t made much of a fool of myself.

This also feel strange. I feel like a jerk for even saying that, but bear with me. Not wanting to struggle with money has always been my main motivation for saving and investing. I resolved to go to college and became the first in my family to graduate. That was just 15 years ago and I had a $60,000 college debt monkey on my back. Here I sit today at a place that I never thought possible.

My uneasy relationship with money continues to this day. For some people, money is a tool used to buy fancy dinners, cars or vacation homes. For me, the big pile is a source of comfort. I’m a lot better than I used to be, but will always be a bit tweaked.

The Three Factors that got me here

I can’t give you specific information on how to acquire your own million dollar egg. However, I will tell you what I consider to be the three most important factors for me.

I started my first real job in 1999 making $37,100/year. Not exactly a fortune. However, I worked harder than any of my peers, often putting in 80 hour weeks. The right people noticed. One of them quit for a higher paying position and she was happy to recruit me for another position at that company.

I don’t endorse my past habit of stock picking, but there is one thing I did that I wholeheartedly recommend; I never lost my cool. Apple and facebook have tanked severely during the time I have owned them. Instead of hitting the sell button, I did nothing. In the case of facebook, I bought more. I encourage you to apply this same principle to less risky investments like index funds.

I drooled when the Honda S2000 came out. I also drool over the Acura NSX regularly. Perhaps I’ll have one of those machines someday, but not until I am completely comfortable that I have enough money to never work again.

Where do I go now?

When I started the blog, we were between homes. We weren’t happy in our neighborhood, but also had no idea where we would end up. Therefore, I made my goal $1,000,000, but with the following asterisk: 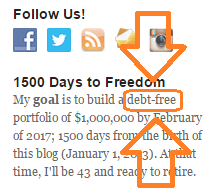 Finally, today is just one very small point in time. The whole 1500 Days thing is also a bit silly since that is also a small amount of time in an economic cycle. Markets will go up and down. Sometimes these movements happen over the course of years. Next year, I may very well make my goal. I could also end 2015 at 900K or less. No one knows for sure. Long term (decades) is really where your mind should be.

Here I go with the mushy Thanksgiving part (gag alert!)

My neighbors and family that I see most regularly are not like me at all. Most are typical consumers who blow every cent that comes in and more. We have acquaintances that are on public aid, but drive a $40,00o car and eat at fancy restaurants. And they think we’re the poor ones, ha!

Not everything comes down to money, but a whole lot does. I find that frugal people have a lot in common. I can invite my frugal friends over for a homemade pizza and they don’t judge. Instead, they offer to bring their own dishes or beer. I can suggest that we all go for a hike or play board games. Frugal people live good lives because they care about the right stuff.

I’m a social weirdo. Meeting new people terrifies me. I don’t get truly comfortable around others until I’ve spent about a year with them. However, the people I’ve met through this blog are different. I can’t say that I’m instantly at ease, but after about 5 minutes of terror which I try very hard to conceal, I’m usually OK. Whether we’ve only communicated over email or you’ve had a chance to come over and chat over pizza and beer in our 75% complete kitchen, I’ve enjoyed it all. Thanks.

Thanksgiving is a great holiday. I love gorging myself. First, I cover my plate with turkey, stuffing and loads of mashed potatoes. Then, I add some more stuffing and mashed potatoes. Finally, I drench the whole mess in gravy and different kinds cranberry sauce. I go back for seconds and thirds. A good beer accompanies the chaos.

However, the really great thing about the holiday is the time we spend with others. A friend who I’ll once again refer to as Denver E drove the point home a couple weeks ago (Denver E, I apologize if I’ve minced your words). He said something like this:

I like Thanksgiving because it’s all about family. No one has to worry about buying stuff for each other. We just get to spend time with those that we care about.

I could not have said it better.