I absolutely love stories of people who are doing great things in life because they work hard and are willing to crunch numbers. I love the story even more if the people behind it are awesome. My friends, Laura and Randy fit this description perfectly.

Awesome story: Laura and Randy went from never owning a business to running two successful laundromats. If you’re interested in owning a laundromat, their site Laundromats101 is an awesome resource. No fluff either. Laura dives into the numbers. She knows her stuff.

Awesome people: I first met Laura and Randy at a blogger conference in New Orleans back in 2014 and liked them immediately. We met again in Colorado a short time later and have since had fun hiking around San Francisco and San Diego.

And I love this guest post from Laura. It’s inspirational and hilarious, but it also details how Laura and Randy took a huge leap of faith to become first time business owners. I hope you enjoy the post as much as I did!

(In fact, there are a lot of annoying sayings, but we only have so much time here.)

My best guess is that we find them annoying because we kinda sorta know these inspirational one-liners are probably true, and that fact haunts us a little.

And for me, it began a little over two years ago. I felt stagnant. We had paid off our debt, we were saving over half of our income, and our net worth was slowly but steadily climbing each month. But it was like watching grass grow. Or paint dry. Man does that get old after a while. And when things get boring, I tend to stare off into space and drool a lot.

I needed something new to get our net worth figure really moving upwards. But new is scary. And I could swear I started to hear those annoying inspirational one-liners in my dreams.

The only race you can’t win is the one you don’t enter!

A watched pot never boils!  (Ok, this one is completely unrelated, but thought I’d throw it in for good measure.)

Everywhere I turned, there they were. Facebook, bumper stickers, Starbucks mugs, posters at the doctor’s office. Annoying inspirational quotes plopped on top of a breathtaking photo of a mountain. It’s like when you’re interested in a particular car and suddenly you start seeing them on the road…everywhere.

So it was time to start thinking outside the box. I wanted to increase our income, but selling a kidney or becoming a famous rapper were not on my short list.

At first, I farted around a lot thinking of “great ideas” and “what ifs”. As I would drift off to sleep at night, grand visions of success would consume me. Many times the glow from my phone would light up our bedroom at 2am, while I wrote down the “life-changing” ideas that were swimming around in my brain.

First, I planned to change the fashion world with my online T-shirt company. Then I was going to consume every American’s free time with my new strategy board game. Then I would really lock down my place in the history books with my prototype for an automatic wind-up-motor hammock swinger thingy. Shark Tank, here we come.

[Side-note: Let’s be real, that last idea is actually pretty kick-ass. Don’t know about you, but I’d pay good money to lay in my backyard hammock, automatically swaying back and forth like a baby. I could call it something like “Laura’s Swingers”. Ummm…now that I’ve looked at that name for a few seconds, maybe not.]

Getting back on topic, I admit that I gave each of these ideas some mental energy. I marinated on them for a day or two until the fever passed. (Go ahead and snicker/laugh/snort at my hammock swinger, I don’t mind.)

Some of us would call this wasted time. (Ok maybe not some of us, more like all of us.)

I began to think a little more critically about our options to increase our income.

It needed to be something solid, no guessing games or start-ups. It needed to be relatively passive, as we both had day jobs. It needed to have a solid return on investment, significantly higher than the stock market, to make it worth the effort and risk.

So we went back to the core pillars of wealth; meaning that the vast majority of wealth in the world has been achieved through one or more of these three areas: (1) investments (stocks, bonds, etc), (2) real estate and (3) owning a business.

We decided to start with real estate. And we were scared out of our minds. We didn’t know the first thing about real estate investing.  So we dug into BiggerPockets.com, and immersed ourselves in industry info. (Highly recommend that site, by the way.)

Then we discussed our game plan. We’re both extremely handy and have a lot of remodeling experience, so the idea was to buy a cheap fixer-upper duplex in a working-class neighborhood, fix it up, rent it out.

This one was cash-only, that one was more fixer than upper, another one had foundation issues, blah, blah, blah.

Then we finally found the one we wanted.

We were already pre-approved for a small loan, it was bank-owned and priced low, so we put in an offer at full asking, and waited. And waited some more. Then we heard that an investing group from Southern California had decided to join the party and they made a last-minute offer; full price, sight unseen, all cash at close, 15-day escrow.

We already knew. They were going to pick an offer, and it wasn’t going to be ours.

After licking our wounds and throwing a few pity parties, we went back to square one. We realized that with real estate in our area being highly competitive and overpriced for investors, you needed to be either a big dog with cash in hand, or able to find pocket listings (not on the market) in order to get in the game.

So we set real estate aside and turned our eyes to the last core pillar of wealth…owning a business.

There’s Money in those Machines!

And at the end of 2014, we found what we were looking for.  An unattended self-service laundromat for sale, in our neighborhood shopping center.  It had been in business for 40 years, and was still making good money.

We submerged ourselves in information about the industry, business ownership and purchasing a business. Then took the plunge.  We invested $50,000 of our savings and purchased our first laundry. We were officially business owners.

The feeling was euphoric.

But something else happened that we didn’t expect…it’s called empowerment. It was the rush we felt from pursuing and getting what we wanted, even though it was initially outside our comfort zone.

For so long, we had the perception that “other” people owned businesses, not regular Joes like us.

But after buying that first business, our mentality changed. We began to pursue other things that felt out of reach before. And the domino effect began…

The truth is that we’re still blown away by the success we’ve seen after taking that first uncomfortable step.

We had finally stopped talking about things we wanted, and started actually putting things in motion. I still remember making that first phone call to the listing broker about the laundromat in our neighborhood. I was nervous and scared, rehearsing what I was going to say, oddly wishing that it would go to voicemail. But I did it anyway.

That one decision has led to so many other income opportunities. Opportunities we never could have predicted when this whole journey started.

With two businesses and the additional income streams, our net worth grew more than we’d ever hoped.

I know it takes courage to step outside your comfort zone. I get it. But once you do it the first time, you’ll find yourself believing things are possible that didn’t seem so before.

Maybe 2017 will be the year you decide to pursue that first elusive goal that seems unattainable, or something “other” people do.

Just get a little brave and knock over that first domino. Who knows what it will set in motion?

And because I can’t leave you without providing an annoying inspirational quote with a mountain in the background, here it is. And…you’re welcome. 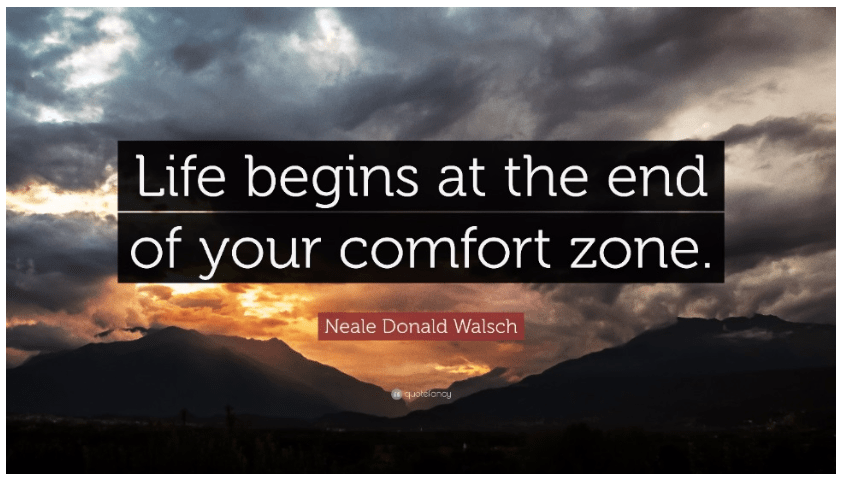 Thanks so much Laura for guest posting today! Hope to see you and Randy soon!

Folks, if you’re interested in laundromat investing, Laundromats101 is the place to go. The wife and I were so inspired by Laura and Randy’s success that we’ve looked into buying our own laundromat.