Yesterday, I wrote about the dishwasher issue. That issue miraculously resolved itself (more on that next Monday). However, there are far worse problems in the 1500 household concerning the backup dishwasher (Mrs. 1500)…

I don’t know how to explain this gently, so I’ll get right to the point. Like a lot of modern day marital strife, it all started on the Internet where she first “met” him. I won’t go into all of the terrible details, so I’ll start with the most painful and shocking one. Bear with me; this hurts. Also note that portions of this post may not be suitable for younger readers.

It began with pictures he posted of himself. Not just any pictures ladies and gentlemen.

He took pictures of his you-know-what and posted them for the world to see. All over his website.

I can’t make this stuff up.

And let me tell you about his you-know-what. I don’t blame Mrs. 1500 because it’s one of the biggest ones I’ve ever seen on a man. The thing is so big, it probably has its own gravitational pull. Most men would be happy to have one half of his size. Seriously.

To make matters worse, this guy is married. What is the world coming to? Sigh…

Of course, I’m talking about Mr. Frugalwood’s beard and the bookcase he helped me design.

Let’s start with the beard: 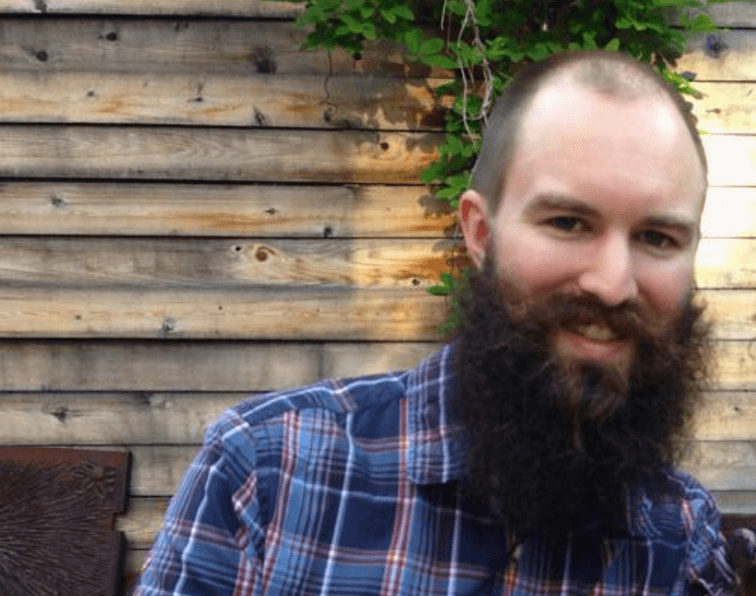 Did you see the size of that thing? He probably stores his lunch and baby supplies in there. I wouldn’t be surprised if he finds a long-lost hammer or greyhound in that thing some day.

I can’t even come close:

I needed to build a bookcase for my home. This is new territory for me and since I knew that Mr. Frugalwoods was wise in the ways of working with wood, I reached out to him, asking for help and suggestions.

I sent him my idea:

Cool! Now I had two designs to choose from. I enthusiastically showed them to Mrs. 1500. Of course I knew she would pick my design. Until she didn’t:

I was devastated, hurt and broken, but moved ahead with the project anyway.

Note to the reader: If you couldn’t care less how I built this thing, skip down to the “You can do It!” section. If you do that though, you’re missing some juicy and fun details.

How I built the Bookcase

Let’s start at the beginning. I was going to build a boring railing here: 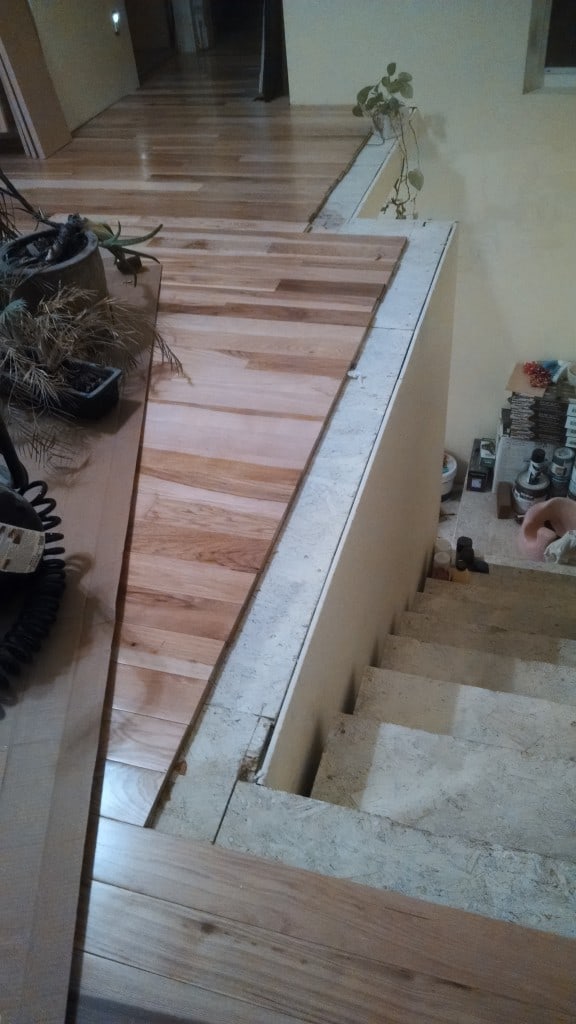 The day before I was going to order the railing parts, Mrs. 1500 discovered someone who had built a bookcase instead:

Yes, what a wonderful idea! Except that I had no clue how to build something like this.

I checked out a bunch of books from the library about cabinetmaking and other related crap. I paged through the books for about 5 minutes before I tossed them aside and decided to do what I usually do, just make it up as I went along. What was the worst that could possibly happen?

Next, I bought a bunch of MDF from the local home improvement store. I went with MDF because the cabinet grade plywood would have cost me a small fortune and it all seemed warped. I have a hard enough time with straight wood. MDF is cheap and straight. Besides, I knew I’d be painting it white.

FIrst, I cut out the walls of the bookcase and screwed/glued them together: 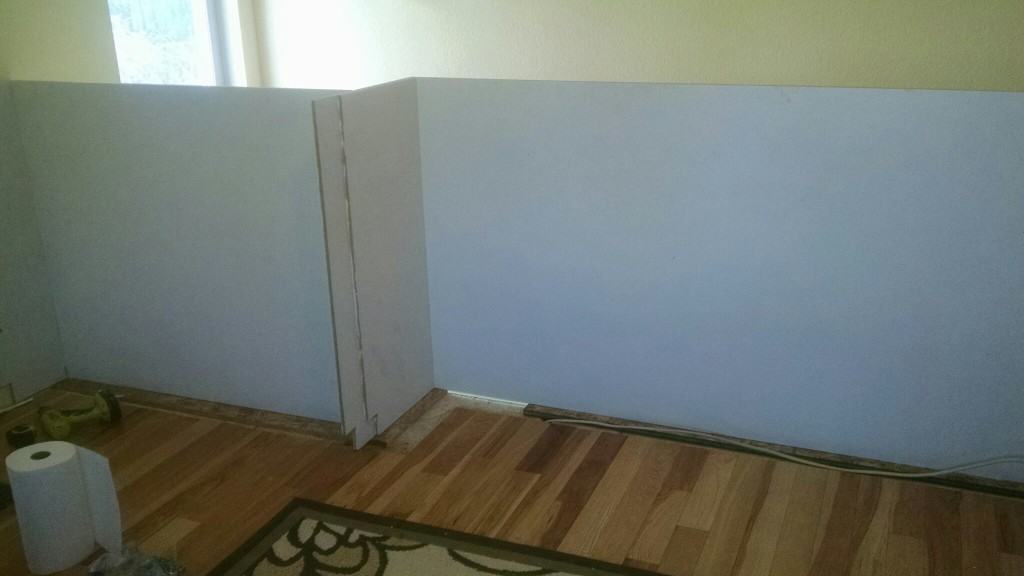 Next, I built support boxes on the floor from 2x4s. I nailed the walls between them and attached them to the back: 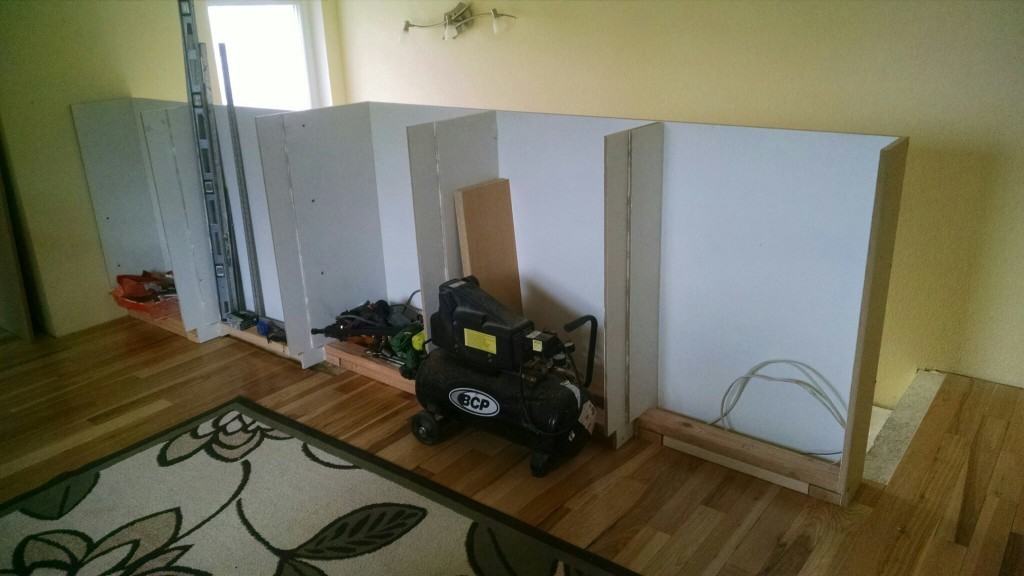 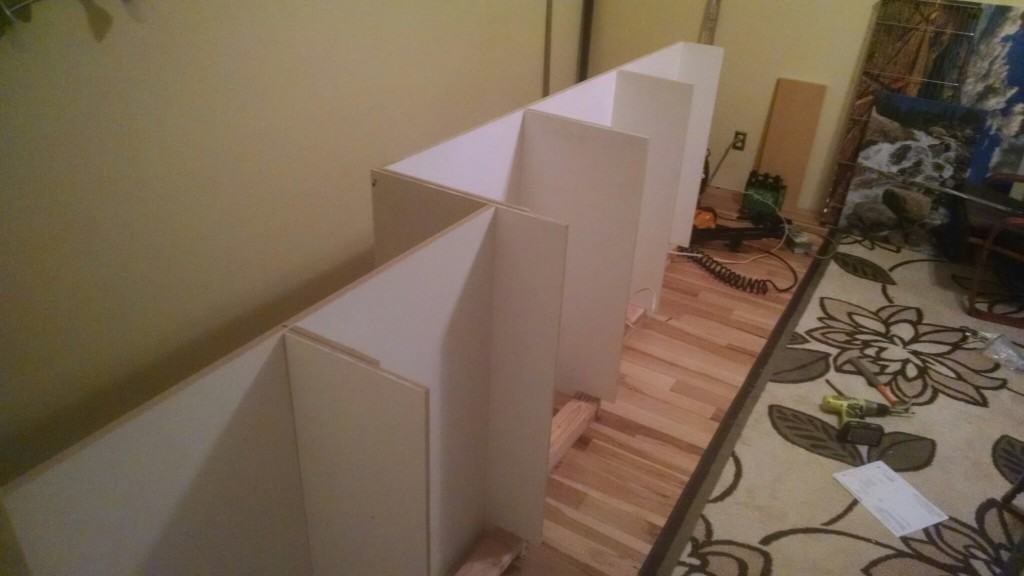 After that, I attached a 3/4” piece of MDF on top. That would have made for an ugly bookcase, so I glued/nailed blue stain pine wood flooring to the top. I put an edge around it, sanded it down and applied polyurethane.

The final touch was running electricity to the thing and strategically placing some LEDs to light up the shelves. Here is the finished project: 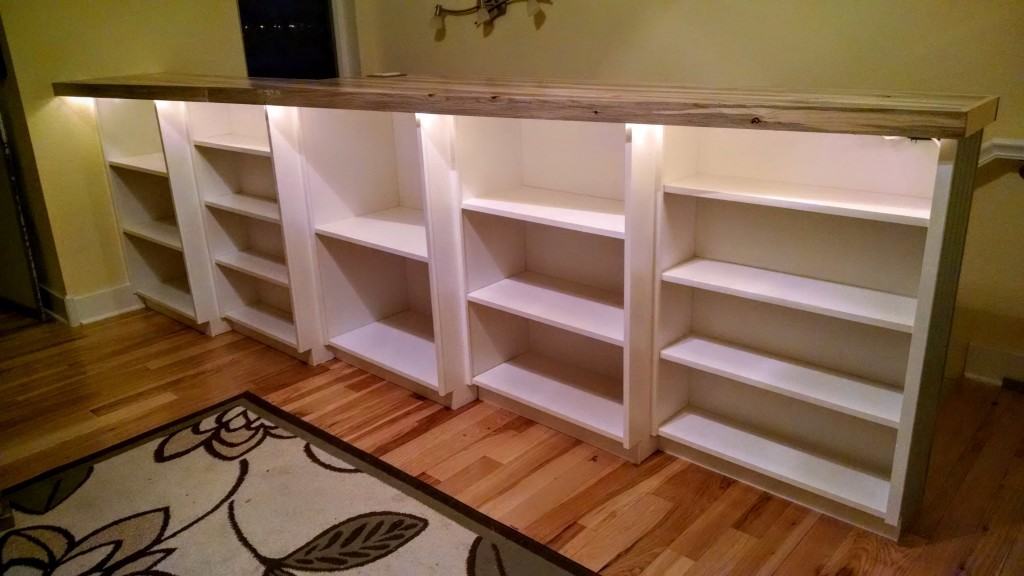 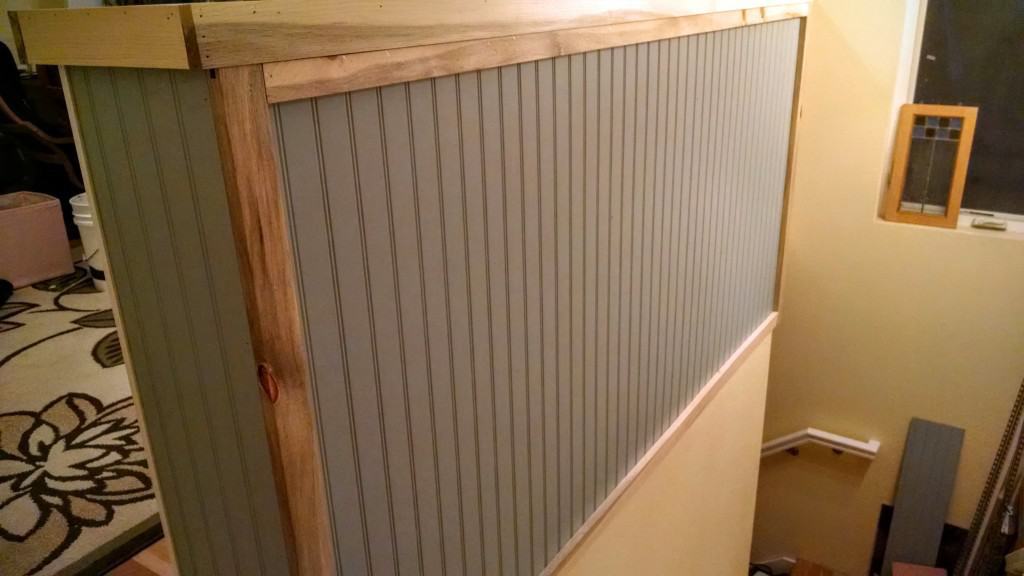 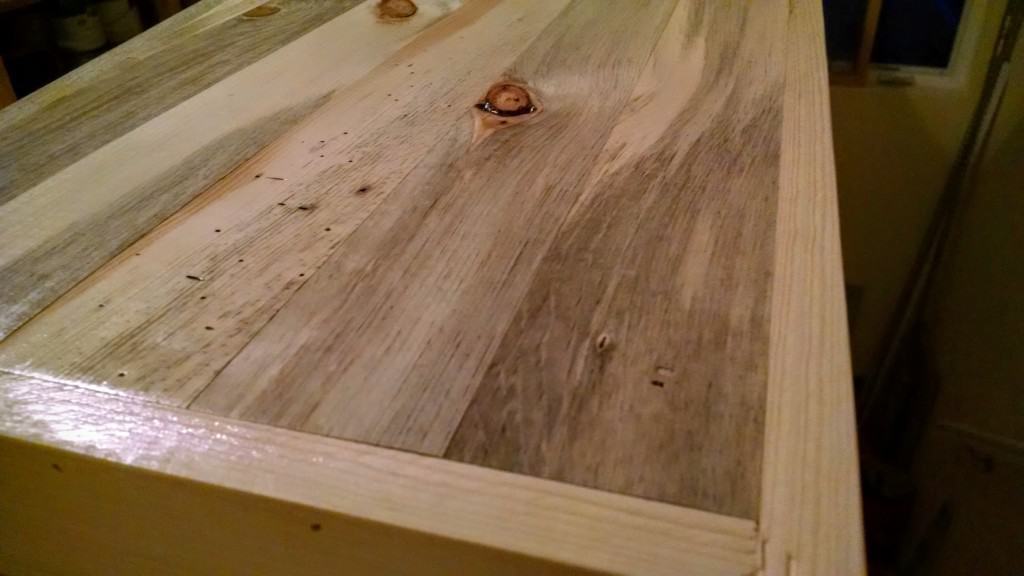 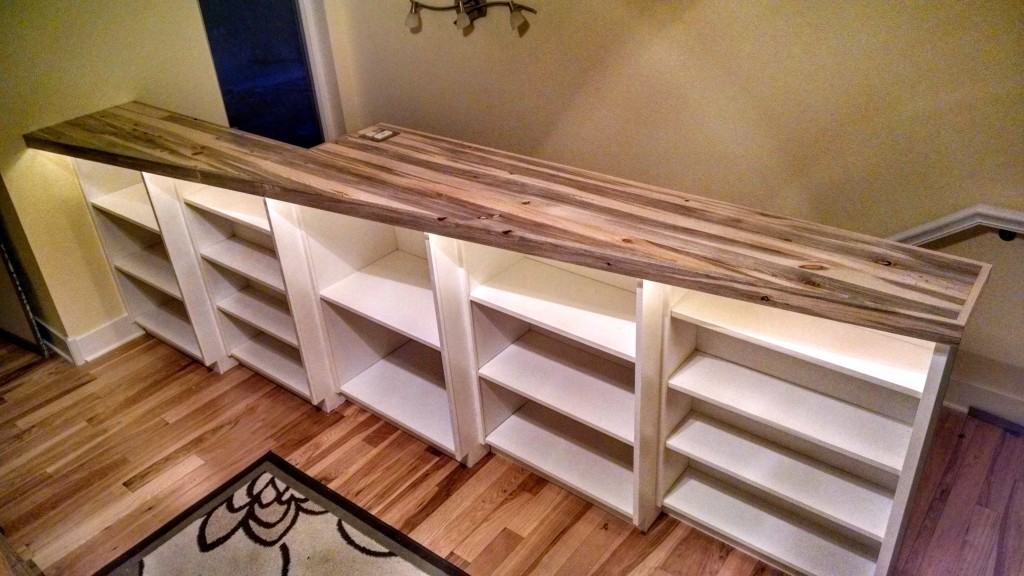 You can do it!

This thing turned out far better than I expected! In many facets of life, I lack confidence. This project was no exception. I was terrified that it would turn out looking like some horrific piece of junk.

I took my time, measured carefully, swore a lot, measured again, almost cut my thumb off (just kidding, maybe…) and consulted the Google when I needed to. Now, I have a beautiful, one of a kind piece of furniture in my home. I smile whenever I look at it*.

I encourage you to do the same in life. Think about projects and problems creatively. Instead of looking at Yelp to find a serviceman, look at YouTube and watch a couple how-to videos. You may fail in which case you can call the guy that you found on Yelp. I’ll bet you won’t though. I’m just a white collar dude who didn’t know how to do much of anything 15 years ago.

Finally, if you’re a guy who is happily married, keep your wife away from those guys with big you-know-whats. Beards, of course.

*I plumbed the house myself and also smile whenever I flush. It is gratifying knowing that the PVC that I laid out with my hands is shuttling my poop away. Yeah, I’m strange.