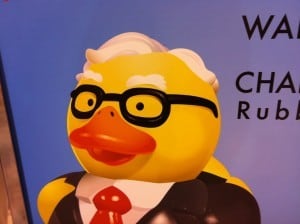 This is part 3 of a 3 part series about my weekend at the Berkshire Hathaway annual meeting. Part 1 was an overview of the meeting while in part 2, I discussed the famous question and answer session. Today’s post is about what I felt was the big lesson of the weekend.

Remember to tune in tomorrow for the duck giveaway. I have 2 sets to hand out. One set will go to a random commenter while the other set will be given away in a contest. Johnny Moneyseed will serve as the guest judge and will pick the winner.

Whenever I tell people that I went to the meeting, the first thing people ask is “What were Warren’s predictions?” This was also the most common question at the meeting. People repeatedly asked Buffett and Munger to ‘read the tea leaves’ and let them know what’s in store for the economy. Buffett’s and Munger’s answers could be summed up in 3 words:

Some of their actual answers were:

Another quote from Buffett summed things up perfectly:

“If people try to time the markets, they’ll do very well for their brokers and not for themselves.”

The philosophy of Buffett and Munger stands in stark contrast to almost every other investment ‘guru.’ Buffett and Munger buy strong companies with big moats and stay with them for the long term. They don’t care about market fluctuations. This is different from just about everyone else out there. Don’t believe me? Flip over to your favorite financial website. I checked out Marketwatch. One article talks about how ‘Why stocks aren’t overbought.’ Another suggests that it may be time to jump out of the markets soon.

So, who is correct; the boring Buffett philosophy or all of these other prognosticators telling you to time the market? I’ll help you out. Take a look at page 1 of the Berkshire annual letter. There are lots of incredible numbers in there, but one really stands out: 19.7%. This is Berkshire’s annual return from 1965 to 2012. Compare that to the 9.4% return of the S&P 500 over the same time period. Let’s put the 19.7 number in perspective:

Buffett also put his reputation on the line when he made a 10 year bet that the S&P 500 would beat hedge funds over time. Five years into the bet, guess who is winning? It isn’t the hedge funds.

So, the lesson is that timing the markets is a fool’s game. The successful investor is the one who picks strong companies and sticks with them for the long haul. Isn’t it amazing that some of the most effective investing advice is also the simplest? Slow and steady wins the race. Try to time the markets and you’ll fall on your face.