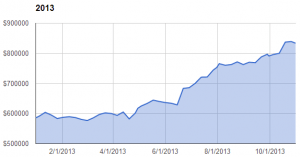 The markets and my portfolio continued to roll in October. The S&P 500 climbed an incredible 4.5% while my portfolio shot up 5.4%.

What goes up doesn’t have to come down

I’ve been hearing a lot of chatter lately about how the markets are ‘hitting new highs’ and as a result, ‘we’re due for a correction.’ People who make these statements are missing a fundamental aspect of the market. If given enough time, the markets always go up. This is the natural way of Mr. Market. If the markets are performing as they should, new highs should be reached periodically. Mr. Collins explains it much more eloquently than I ever could over here. (While you’re visiting Mr. Collins, you’d be wise to read his whole stock series.)

This isn’t to say that there won’t be occasional market farts. Black swans will periodically show up and take things down for a while. The derivative black swan of the past decade was a mean one, bringing the S&P 500 all the way down to 683 on March 6, 2009. Today, this index sits at 1,761. If you yanked your money out when that swan showed up, you missed one of the greatest bull runs in recent history.

There will also be periods of irrational exuberance. The Internet stock boom of the late 90s was a recent example. But again, Mr. Market self corrected and prices returned to normal. Again, ignore the market farts.

The bottom line is that just like most other aspects of life, the market is cyclical; however the long term trend is up. Stay in for the long haul and you’ll do just fine.

Over 99% of my investments are in the stock market. The other 1% are in peer lending. This doesn’t make me happy. I just told you that I think that Mr. Market is great for long term wealth appreciation, but I’d like a consistent source of income in retirement. The solution for me is rental homes.

In the past couple months, we’ve tried to buy multiple homes. We’ve struck out every time. The housing market in our slice of America is on fire. It is not unusual for homes to have multiple bids just hours after hitting the listing service. I really dislike getting into a bidding war.

The other problem is that our rental returns won’t be so hot. On a $200,000 home, we may be able to get $1400. Bleh. However, I am extremely bullish on prices long term in our area, so this doesn’t bother me too much. Hopefully, we have more success in 2014.