Sometime in 2014, our little family of 4 decided that we’d spend the holidays alone this year. Everyone we know is scattered and we wanted to sit back after a hectic 2014 and relax for a bit.

In the fall, Mrs. 1500’s family announced that they were coming by us for the holidays. Ummm, OK, at least we don’t have to go anywhere.

At the same time, my mother started dropping guilt bombs on us left and right:

It would be so nice to see the grandchildren for the holidays.

It won’t be the same without you.

Your sisters will be here….

I caved. All of a sudden, we had lots and lots of plans.

Mrs. 1500’s family came out for about 5 days. Luckily, the family feuds were few and far between. One particularly obnoxious member of the clan continued with her obnoxious ways, but she was easy to ignore. However, her children did bring a nasty virus and left it with us. Thanks.

We then drove to Las Vegas to see my folks. There were some treacherous conditions in the mountains, but the trip was otherwise uneventful. From there, we drove to Phoenix to see some friends. Finally, we went down to Tucson to visit with more family.

Tucson was a highlight because the city has an awesome airplane museum and Mrs. 1500’s cousin is a wicked good cook. The airplane museum has an SR-71 and an A-10 Warthog, two planes I am especially fond of. And then there was the cooking.

If you’ve never had real mole sauce, it is one of life’s great gastronomic treats. I’m not sure I’ve ever put anything so delicious in my mouth. This rare treat caused me to eat at least 10 tacos (I lost count). In one case, I just filled up the taco shell with the mole and nothing else. Anyway, I didn’t feel so hot after gorging myself, but it was totally worth it and I’d do it again in a second.

Why am I telling you all of this? I have no idea. Oh, I know why; it’s an excuse. We arrived home from all of this road tripping/ airplane drooling/ mole eating and I had to go back to work the next day. All of the blog-work I had planned to do on my week off was flushed down the potty. So next week, we return to our normally scheduled posting schedule. However, I do need to tell you about how we did in December.

In most months, Apple makes or breaks my portfolio. December was no different. Apple dropped like a… well Apple, and kicked my portfolio in its apples. Hopefully the AAPL doesn’t sour further when earnings are announced at the end of January. 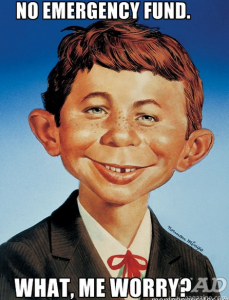 Since our remodeling expenses are mostly in the rear-view mirror, I look forward to building up the pile a bit. Because of my new work situation, I should be able to put lots of money into the 401k too.

The second to last stock I’ll ever buy

Lending Club IPO’d in December and we purchased 500 shares at the IPO price of $15. The stock took off like a rocket and now sits at about $23. What does that mean? Pretty much nothing.

While I’ve taken some ridiculous chances on stocks in the past, I’ll now only consider buying a stock if I’m confident that the company will be much stronger 10 years from now. Of course, it would be silly to buy a stock if I didn’t also feel that it would outperform the S&P 500 index. Beating the indices is just about impossible unless your name is Warren Buffett, so don’t follow my lead.

However, I really like Lending Club. I’ve been following the company for years and am a big believer in their business model and leadership. They have a product that fills a void (low interest, uncollateralized loans), much like the iPhone filled the smart phone void when it stormed into the market in 2007.

What is the last stock I’ll ever buy then? If I ever buy anything else, it will be more Berkshire Hathaway.

Where do we go now?

Anyone in the stock market has had a very good run lately. The party can’t go on without taking a breather every once in a while, but when that pause will happen is ridiculous to predict. On the downside, much of the world is struggling economically. However, the US has somehow managed to keep its head above water as economic indicators continue to improve.

As for me, I’m going to keep throwing money in the direction of Mr. Market. One thing I’ve been thinking a lot about lately though is that only 1% of my portfolio is in bonds. The rest is in stocks (some pure stocks, but mostly funds). While I consider myself to be an aggressive investor and very comfortable with risk, perhaps more of my future money should be directed to bonds. Thoughts?

*I still owe something like $120,000 on my mortgage. Because I have a low rate, I firmly believe in not paying it off. My compromise is to have enough money put away to pay off the mortgage at time of retirement. So, to retire today, I would need about $1,120,000.

**This is an affiliate link. If you sign up, the blog makes a little bit of money and I can afford to carry on with ridiculous home improvements and fart jokes.miss any fart jokes, would you? I didn’t think so. With that out of the way, I would never recommend anything I didn’t use myself and completely believe in. Personal Capital is totally free and and awesome way to keep watch over your investments. It’s worth it for the fee analyzer alone.

***The numbers on the right side of the page only reflect my investments and cash. Net worth includes, but is not limited too: