Mrs. 1500 and I have been trying to purchase a rental property for several years now. All of our money is in the stock market and we’d like to diversify. The problem is that the housing market in our neck of the woods is incredibly hot. A couple weeks ago, we just failed in our 3rd attempt at buying an income property and our second attempt at buying a duplex.

For those of you who don’t know what a duplex is, it’s two homes connected to each other. Here is a picture of one that I stole from the Internet: 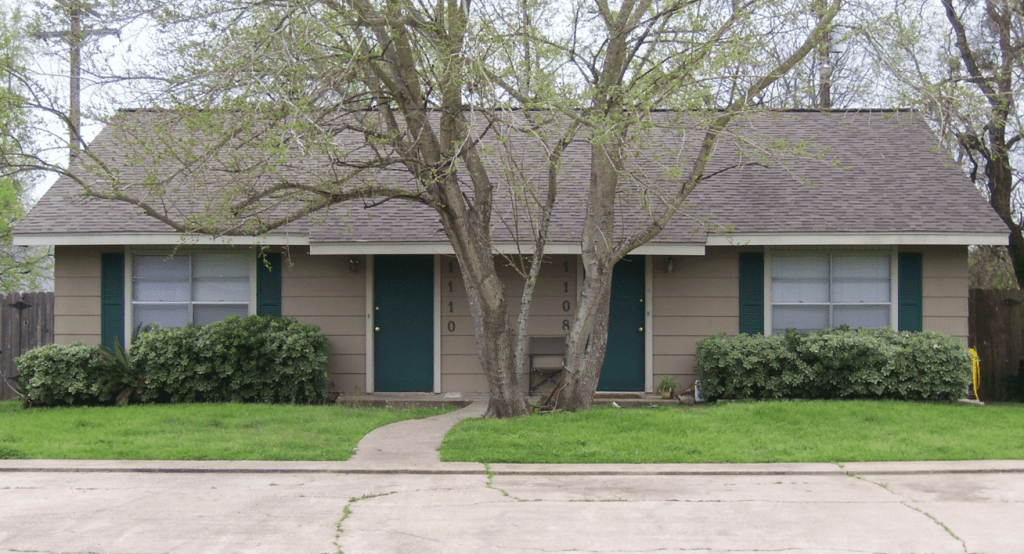 I have a love-hate relationship with duplexes. I’m all for multi-family housing, but why stop at 2 units? Go for 3 or 4 or 8! With duplexes, my thought is that the builder should have just put 10′ of space between the units and made it two separate houses.

Despite my lack of enthusiasm for the duplex design, I really want to buy one. They make great rentals as often the ROI is much better than what you can get for a single family home. Unfortunately, every other real estate investor in my area is aware of this as well.

Mrs. 1500 and I were pleasantly surprised when a really nice duplex went on the market in a neighborhood that we both love.

Mrs. 1500 and I were unpleasantly surprised when we walked over to see it and observed a mini-traffic jam of people that had come out to see the property.

We toured the units and put in an offer, only to get shot down the very next day. The listing agent had this to say:

Yikes. Our offer was over asking price, but not by much and it also wasn’t cash. We never had a chance. Not even a remote chance. Life goes on.

My first job post college was in the IT department of a major retailer. I worked with thousands of other folks at the corporate headquarters. One thing that I quickly realized is that a sizable percentage of people in those cubicles were dead weight. There was a core group of folks that made the company work, but many of the others were just along for the paycheck.

Did you know that the stock market is similar? Most stocks don’t do much of anything. Take a look at the chart below from this neat article:

I find it fascinating that just like people, a small percentage of stocks are doing most of the work. The most extreme example of this phenomenon is Altria. Morgan Housel wrote about it recently and the numbers blew my mind:

One dollar invested in this company in 1968 was worth $6,638 yesterday (including dividends). That’s an annual return of 20.6% per year for nearly half a century. No other company comes close to matching its long-term results, according to Wharton professor Jeremy Siegel.

What do these extremes mean for the index investor? If only a small percentage of stocks do really great, does it make sense to own the whole index? Why should I own all of those dogs too?

The answer is easy; it’s very, very difficult to separate the winners from the dead weight. Even the great ones like Charlie Munger and Warren Buffett who have a strong record of beating the market, make massive mistakes.

It’s worthwhile to hold all of those duds because you own the really great ones too. Over time, those few super performers more than make up for the dogs. The index fund is the right choice for most folks.

I made good use of the glorious four day holiday weekend. I brought all of the power tools in the house (Mrs. 1500 loves when I do this) and went to work. I installed casing around all doors and got some of the floor trim done also. This took a good deal of time because I made some of the door casing pieces myself from a 4×8 sheet of MDF board. Although I saved a good deal of money and the results were fine, it wasn’t worth my time.

Luckily, I had some fun too. On Sunday, Mrs. 1500 and I cruised down to Denver with a couple friends and “learned” how to play Contract Bridge. I use learned in loose terms because this is a complex game that takes many years to master.

I knew nothing about Bridge before the class, but loved it. For a guy like me who is always thinking about numbers, this game is right up my alley. Anyone up for a round?

*I still owe something like $120,000 (I’m too lazy to update this every month) on my mortgage. Because I have a low rate, I firmly believe in not paying it off. My compromise is to have enough money put away to pay off the mortgage at time of retirement. So, to retire today, I would need about $1,120,000.

**This is an affiliate link. If you sign up, the blog makes a little bit of money. Personal Capital is a totally free and superior way to keep watch over your investments. It’s worth it for the fee analyzer alone. I would never recommend anything that I don’t personally use and completely believe in, so give it a try. If you’ve already signed up through the link, please know that I think you’re one of the smartest, most beautiful people that I have never met.

***My 401k contributions include my own, Mrs. 15oo’s, and the contributions from my corporation. Self-employment with a solo 401(k) is a very powerful savings tool. I should have done this years ago.

****The numbers on the right side of the page only reflect my investments and cash. Net worth includes, but is not limited to:

Daughter then grabbed the cactus. Screaming ensued and the hike was canceled. I probably should not have these plants around the home, but what can I say, I like to live dangerously.