Why I’ve Outperformed the Markets

I’m a geek at heart and have always been obsessed with technology. When I started my first job way back in 1998, I started buying tech stocks. I got burned in the dot-com crash of 2000, but that didn’t phase me.

Traditional companies like Walmart or Exxon are easy to understand. The former is a retailer and the latter is an oil company. Easy. No further information required.

Technology companies are different from others in their potential to disrupt traditional businesses. One needs to look no further than the empty malls all over the United States to see the monster that Amazon has become. Google and Facebook are taking advertising dollars from TV and print. Tesla is disrupting traditional automotive and energy companies simultaneously.

All of this has worked out very well for me. Here are how my picks have performed since I started the blog in 2013:

For comparison, the S&P 500 has returned about 72% with dividend reinvestment.

Why I’m an Index Investor Now

Don’t take this to mean that I support stock picking because I don’t. Technology is volatile and today’s disruptors will be disrupted tomorrow. Nokia? Nortel?? RIM??? I’ve been successful for less than two decades, but I plan on living for at least five more decades. Will anyone know Google or Facebook is in 40 years? Or even 20?

No empire lasts forever. And while it was easy for me to see what these companies had loads of potential, it’s much more difficult to predict when they’ll fall. It will be obvious after it happens, but almost impossible to predict beforehand. The person with the product idea that will bring Facebook or Tesla down has already been born.

And while these four stocks have done well, I’m far less than perfect. I sold my Apple stock right before a huge run-up. Ooops. But remember that Apple too will be disrupted. The technology that will replace phones (Apple’s biggest profit driver) is augmented reality (AR) and you will all experience it before the decade is out. Apple knows this and may lead in AR. But maybe it won’t.

I’m a big believer in index funds now, but I still hold most of my individual stocks. The main reason is that I’d be hit with a big tax bill if I sold. I’ll sell a little off every year and then sell more aggressively when my income is lower and I don’t have to pay capital gains. I feel like I’m playing a dangerous game of chicken with Mr. Market, but life is more interesting with a little drama!

Here is what else I track:

My recent vacations blew my fitness out of the water. I’m too embarrassed to show you many pictures, but I’ll show you at least one. Sensitive viewers, avert your eyes now. 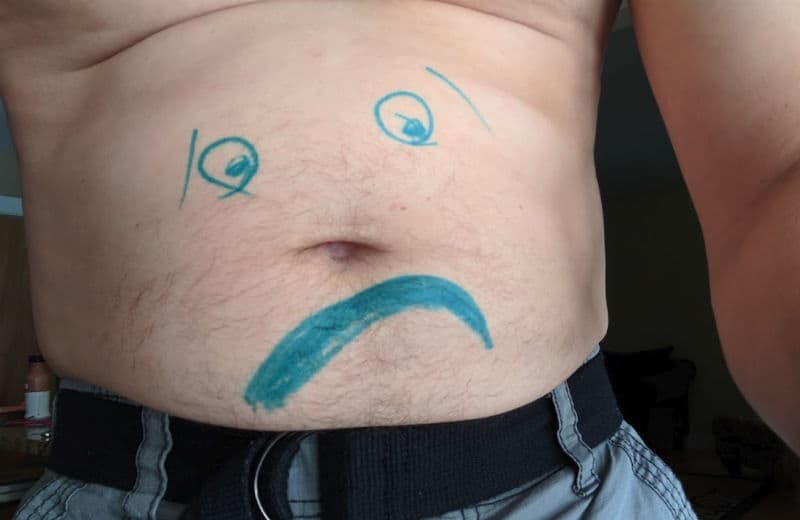 Yeah, not good. I’m working on it though. I’m in a epic death match with Mr. WoW to see who can lose the greatest weight percentage by the end of October.

In addition to blowing up my gut, the vacations blew our normal spending out of the water. It is painful to write this, but we blew threw $4,657 in July. Add in our mortgage payment of $1,246 and we’re up to:

Oh wow, it’s painful typing that. That’s a horrible number. August will be just as bad, but we’ll be back on track in September as life settles down. Summer months are always the most most expensive for us.

One more Thing about Stocks

And just because I don’t buy individual stocks much anymore doesn’t mean that I don’t think about them. I love studying business. And I’ve realized one important thing recently:

Software is where it’s at.

The companies that create the best software are going to be the leaders. I already mentioned how important software is to Tesla. Google is a behemoth because it hires the best software developers on the planet. SpaceX can land rockets on floating platforms in the middle of the ocean because of software. Amazon is killing shopping malls near you because of software. Need more examples? Here are two more software companies disrupting old businesses:

Don’t underestimate the importance of software.