I’ve always enjoyed writing, but didn’t pursue it at university. Science and computers offered better career options. I eventually became a computer programmer and banged away at a keyboard for almost 20 years. However, I never forgot about my love for writing.

After I discovered JD Roth and Mr. Money Mustache (the blog that launched 10,000 blogs), I launched my own blog on January 1st of 2013. You’re reading it. It was nothing more than a passion project to document my journey to financial independence and hold myself publicly accountable. Then, interesting things started happening.

Mrs. 1500 had been a stay-at-home mom until a serendipitous turn of events landed her a dream job:

And something else was going on too. I put ads on the blog to help pay for hosting, equipment (Apples grow on trees, but Apple Macbooks do not) and the FinCon conference. The results were unspectacular. In the first 3 years of blogging, I earned less than $1,000. Queue the sad trombone. And the sad daughter: 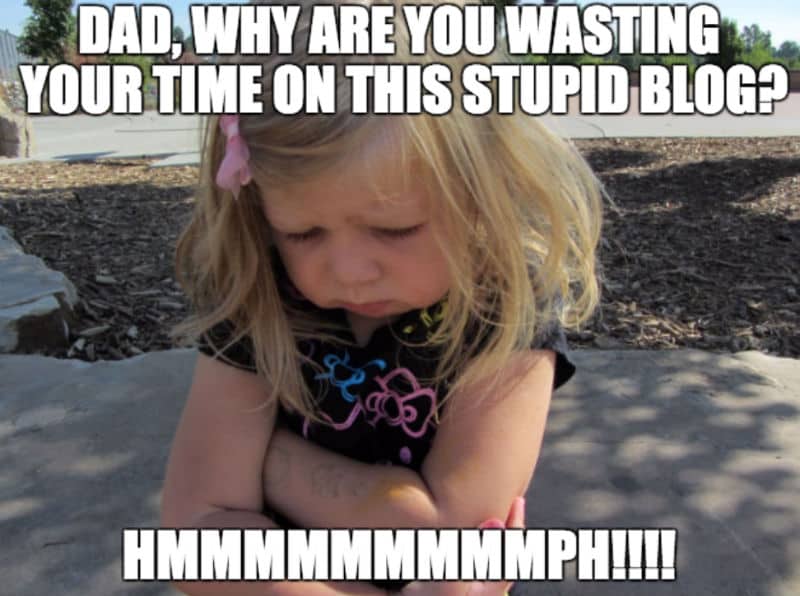 But in year 4, the blog started gaining traction and spitting out more substantial income. It has continued to increase ever since. It doesn’t make a lot, but when you live a frugal life, even small amounts have a fun way of moving the needle.

Fast forward to today. Mrs. 1500 works at her job and I work on the blog. And it is work, but never in the typical sense. Our work reflects our passions. We’re both thankful that we get paid for what we used to do for free.

I don’t make the same money as I used to. The blog, freelancing and Mrs. 1500’s income combined is still less than what I made as a computer programmer. However, it’s enough for us to get by on and still max out two 401(k)s.

So, we don’t have to dip into our savings and our net worth continues to increase. I’m a big fan of the 4% Rule, but it’s nice not to live it yet.

So, am I really retired? Probably not. But why would I stop doing what I love just because it happens to earn some money? 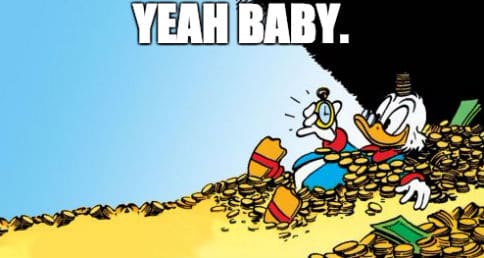 I’m not nearly as wealthy as Scrooge McDuck. When I bathe in my money, all I need is a bathtub.

And unlike old McDuck, I have the decency to wear pants. How does this guy stay out of jail?

In other financial news, we continue to experiment with real-estate. We have $560,000 invested in private loans and syndication deals.

We have $360,000 invested across four different loans. One of the difficult aspects of private lending is the short term nature of the loans. Most of the loans are one year in length, so we have to redeploy money frequently. When one of our loans was paid off this month, I had no other deals to fund, so it all went to VTSAX.

I also like to fund syndicators. In syndication deals, an investor buys an apartment complex and improves it. Often, these complexes have deferred maintenance, are under-managed or both. After the syndicator finishes the rehab, the complex is sold. This typically takes anywhere from three to eight years. I earn payments quarterly, but most of the payout comes at the end when the complex is sold.

Battle of the Bulge

Mr. WoW and I have a bet going about who can lose the most weight by FinCon at the end of October. At stake is $1 and a heaping load of pride is. The loser also has to buy dinner, beer and guest post on the winner’s blog. I’m not doing so hot:

Mr. WoW is a worthy opponent and is currently demolishing me. I need to lose 8 pounds just to pull even with him.

If nothing else, I’m tenacious. I also don’t like to lose, so I’m not throwing in the sweaty towel. Instead, I’m pulling out the nuclear option: 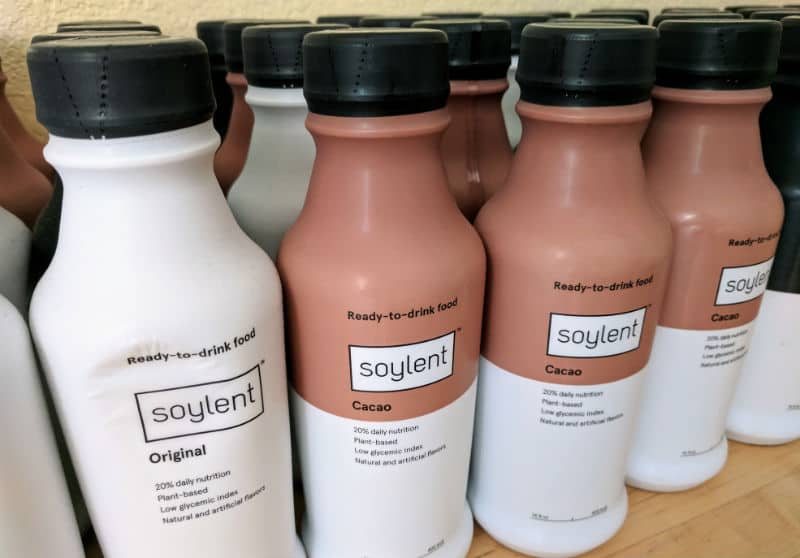 I’m drinking Soylent for breakfast and lunch. For dinner, I have a small, mostly vegetable based meal. I like Soylent for a couple of reasons:

I’m also concentrating on weight loss and not muscle growth. If body recomposition (losing fat while putting on muscle simultaneously) even works, it’s not the most efficient way to remake myself. I’m going to lose the weight first and then work on putting the muscle on.

And Mr. WoW is going to Ecuador. This could be a problem for him:

Joking aside, I love the competition. Even if I lose, competing with Mr. WoW has done a lot to kick my ass in gear and I’m a better person for it.

One Last Thought: Where do Markets go Now?

Everyone seems to be terrified about the near term direction of the markets. I’m not scared, but I am surprised that the markets have held up as well as they have. We have an unconventional president in Trump, tensions on the Korean Peninsula and elevated valuations.

A recession is coming. It’s always coming. And other things much worse are also on their way.

According to Warren Buffett, there is a 1 in 30 chance of a major terrorist attack in any year. I suspect that during my lifetime, someone will pull off something much worse than 9/11.

And none of it is worth worrying about. The world will move on and if it doesn’t, you won’t have to care much about your portfolio.

I’ll continue to shovel money into the stock market furnace. Even major recessions turn into minor blips on the radar decades down the road.

And if an apocalyptic scenario happens, I have Soylent to pull me through.