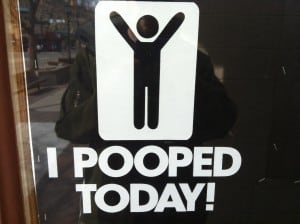 Longtime readers know of our disdain for our neighborhood. On top of being extremely wasteful, no one does anything for themselves. Every week, trucks drive in, pulling trailers loaded with lawn mowers, leaf blowers and all the other things you need to take care of someone’s lawn. The chemical lawn companies are here on a regular basis. Cars filled with women and vacuums arrive to clean the homes. People even have their dry cleaning delivered. I see these things and shake my head, but these all pale next to what I saw last week…

Walking to pick up the oldest little 1500 from school last week, I passed a car advertising Rocky Mountain Turd Wranglers*.  For those of you not familiar, there is a growing market for hiring out the dog-log pickup in your backyard. Yes, you read that right. You can actually hire a person who will drive their car to YOUR house, pick up YOUR dog’s logs from YOUR backyard for a fee, and then leave, only to return again at an interval of your choosing, to do the same thing all over.

Really?!? I can see farming out some things around the house. Electricity. I personally wouldn’t touch electricity with a 10-foot-pole. However, Mr. 1500’s dad is an electrician, and he taught Mr. 1500 a lot about electricity, so we don’t have to hire anyone to do this sort of thing. Ditto plumbing. I wouldn’t do it (water causes a LOT of damage in a very short amount of time) but again, Mr. 1500’s dad taught him about that, too.

What happened to the Renaissance Man?
Is the Renaissance Man extinct? This is (was?) a person who can change the oil in the car, help the children with their homework and perform basic fixes around the house. In our society, no one wants to do anything anymore. They are either unwilling to learn or in the case of the pets, they are just too lazy to bother.

The thing is, these tasks are easier to learn now than ever. Mr. 1500 had an earlier post about using YouTube.com to learn new skills. We started flipping houses way back when, and one of the first things he learned was how to lay tile. This skill seemed pretty daunting at first, but he took his time and did it right. It still takes him a little longer to do than a professional, but the tiles he puts down are level and straight. He has done at least 11 tile jobs since then, saving us a TON of money. They will even teach you how to do this at your local Home Depot, using THEIR tiles and supplies. If you don’t feel comfortable doing it after that, then you can hire someone, but if you can do it yourself, (and it is super easy) you save so much money.

There are many things around the house that I would not pay someone to do, however. I can slap paint on the wall fairly easily, and if I mess it up, I can just paint over it. I know how to sew (that stupid Fashion Design degree does come in handy for some things) so I can make curtains, decorative pillows, pretty much anything.

Look around your life right now. Do you send out your shirts to be laundered? You can learn to starch your shirts at home. It really isn’t difficult, and a quick query on YouTube yields 644 results. Do you change the oil in your car yourself? That is something you can do for a lot less than paying someone to do it. And it isn’t all that difficult to do. Mr. 1500 does it in much less time than it takes to have someone else do it. Bonus! Have someone you know show you how to do it. Make them dinner afterwards as a thank you.

Does someone clean your house? You can do that yourself. Does someone take care of your lawn, do you pay someone to shovel your snow? Physical limitations are one thing, but just paying the kid down the street to do it because you don’t want to is throwing money away.

A friend of mine has three children. She bought a Rainbow swing/play set at Costco for them to play on. When she purchased it, she was asked if she wanted to have someone from the store put it together. For $500. She happily paid it, because it takes such a long time to set up the play set. The guys at the store do it on their days off, and it takes them 12 hours to set it up. OK, I concede it would take a long time to set one of those things up. I have to put together all the Ikea stuff we buy. But you can get your kids, if they are old enough, in on the work. Show them how long it takes to put together something like that. Have them help with counting the screws and nuts and bolts. This can be a learning experience for everyone, and they will have such a sense of pride when they can finally play on the play set they built.

I live on a corner lot in deer country. We have a nice-sized yard. Apparently, the deer had a convention recently, and decided my backyard is where they will poop. I have TONS of deer poop in the backyard, and I have to go pick it up soon. I keep putting it off, because that is a disgusting job, but I surely won’t pay someone to do it. What a waste of money.

But hiring someone else to pick up your dog’s poop just blows my mind. You CHOSE to have a dog. There is no law stating you must own one. You allow it to go into the backyard to do its thing, rather than walk behind it with a bag which you must then carry home. I don’t blame you at all. Who wants to walk carrying a bag of poop?

But paying someone else actual money to pick up the dog poop for you? Really? How lazy can you possibly be? If you don’t want to pick up dog poop, then don’t have a dog.

*Not their real name. I so despise this idea that I refuse to give them free advertising. I was also thinking of using the name Rocky Mountain Crap Cowboys, Colorado Poop Police, Douglas County Doo-Doo Disposal or Sh*t Shovelers for the Super Sloths. Perhaps they started thinking of names and had such fun they turned it into a business. ARRGGHH!!!!