We bought our little foreclosure house back in June. As is the case with many of foreclosures, the previous occupants stripped the home of anything that wasn’t nailed down. Gone was the oven. Gone were the washer and dryer. The refrigerator had left the scene. The only two fixtures that were left behind were the toilet (not so much as one square of toilet paper though) and the dishwasher.

We went to Home Depot and ordered new appliances. The dishwasher was old and ugly, but since it worked, we kept it.

A couple weeks later, I was talking to another personal finance blogger who mentioned that I should have tried to source my appliances used from craigslist. He mentioned that many folks get rid of perfectly good appliances just because they want a new kitchen. Meanwhile, their old appliances still have plenty of life in them and can be had for a fraction of the original purchase price. He told me about some of his craigslist successes. I filed the wisdom away in the back of my head and went on my way. 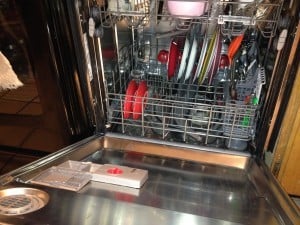 In September, new neighbors moved in two houses down. They immediately started remodeling their home. Piles of junk appeared in front of their home as they demolished the inside.

One day, I was walking past their home and there she was; a shiny stainless steel Kenmore Elite dishwasher sitting on the driveway. It was love at first site. I walked up to check her out. She was even more beautiful up close. I opened her door and the sun bounced off her beautiful stainless steel tub. She was out of my league and seemed too good to be true, but I decided to pursue her anyway. What kind of baggage did she have? Did she come from a broken home? Was she even available? I didn’t know, but vowed to find out.

I went home and Googled her. Turns out, she was a couple years old, but would have sold for $800 new.

The neighbors weren’t home that day, but I caught up with them two days later. Here’s how it went down:

Upon hearing this, I tried to keep a straight face. In my head, I was doing cartwheels on a mountainside filled with flowers. Beethoven’s Ode to Joy thundered in the background. The sun was was shining. Birds sang. There was peace in the Middle East. 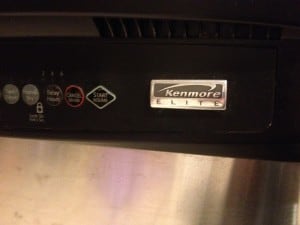 That weekend I installed my new prize. With a touch a trepidation, I fired her up and then stood back. Not only did she work perfectly, but she was the quietest dishwasher I’ve ever had. Some dishwashers can go on and on, sounding like a 747 at takeoff, never giving you peace and quiet when you’re trying to watch a football game. Not this one. She is beautiful. She is quiet. She doesn’t cost a lot. She does the dishes and she does them well. What more could a guy want?

One man’s trash, that’s another man’s come up. -Macklemore

Fast forward to the present. Later this week, I’ll be picking up a used table-saw for $200 that would have sold new for $600. I recently bought a $300 ski jacket for $50.  We have been scouting craigslist* for a used kitchen table. The hunt is more fun than the purchase.

I’m amazed at the stuff people sell or even give away online. A couple months back, someone was giving away all of the cabinets in their kitchen because they were remodeling, Their old cabinets looked great. I would have had the most beautiful garage cabinetry in my town. Alas, someone beat me to that, but I won’t stop looking.

Next time your refrigerator goes out or the washing machine has spun it’s last, I encourage you to forget about the big box store and see what you can pick up used. There are outstanding deals to be had from silly neighbors who can’t stand the look of their 8 year old kitchen or must have a new, front loading washing machine.

Don’t even think about my dishwasher though. She is staying put.

*In all serious, please do be careful when buying used. I can’t stand the thought of buying stolen merchandise. If you’re buying a bike, check it’s serial number here. Check for stolen cell phones here. Ask for the original purchase receipt and serial number if applicable. If the seller isn’t forthcoming or acts strange, it is probably a better idea to skip the item.