On rare days, it’s difficult for me to write – the ideas show up in my head faster than I can write them down. However, the inspiration for today’s post showed up in my mailbox; no brainpower required! Sometimes, this job is just too easy.

Somehow, I got put on the wrong mailing list. I received some interesting mail this week. I’ll also reveal a goal I’ve never talked about before. Brace yourself.

Lately, I’ve also realized that my FI journey isn’t about FI at all. Read on… 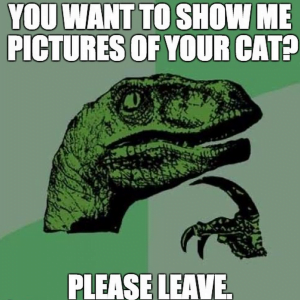 Here is a list of some things that I couldn’t care less about:

See the top of that list? Fashion. In the summer, I like to wear white t-shirts and shorts to stay cool. In the winter I switch to black shirts and jeans.

When I was in my 20s and had just started my first real job out of college, I had this conversation with an older co-worker:

I have no idea why it would be fun to sit around with strangers, eating mediocre food with a tuxedo you just paid to rent on a boat you’re paying to be on – all while you’re on vacation! How did this become someone’s idea of a good time? Sounds downright terrible.

My views have not changed. It’s 15 years later and I still don’t appreciate dressing up. In fact, I hate it more now than ever.

In my home office where I’m typing this now, my clothing is often unfit for public consumption: ratty t-shirts + sweat pants + fake Crocs (gasp!) It’s comfortable and that’s all I care about.

The Junk Mail Gods are trying to change me though.

I was unpleasantly surprised and mildly amused when this arrived in the mail addressed to me: 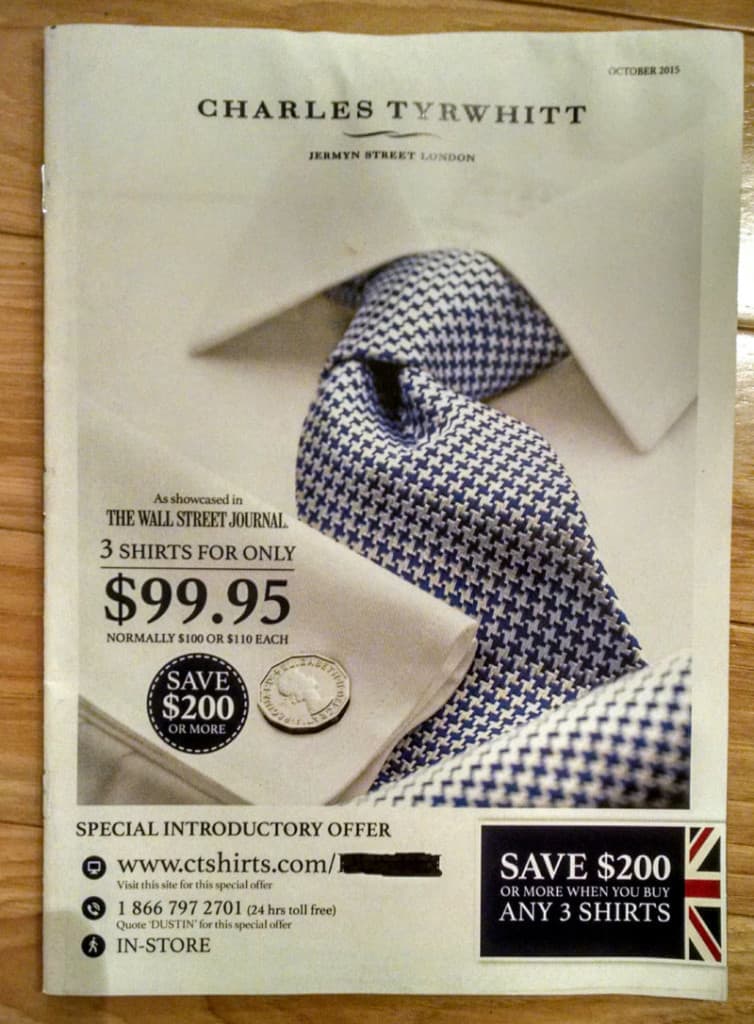 Dress shirts; really Junk Mail People? I have no idea how I ended up on the mailing list for this company. They are throwing their money away. I will never wear another tuxedo and with any luck, never wear a suit again either. I have one that sits in my closet that may see the light of day for wedding/funeral duty, but even then, I’d prefer not to wear it.  If you see me in it, it’s because of spousal pressure. (Mrs. 1500 note: He might have to wear a tuxedo again at some point if the girls get married and ask him to.)

This mail showed up yesterday, just in time for today’s rant: 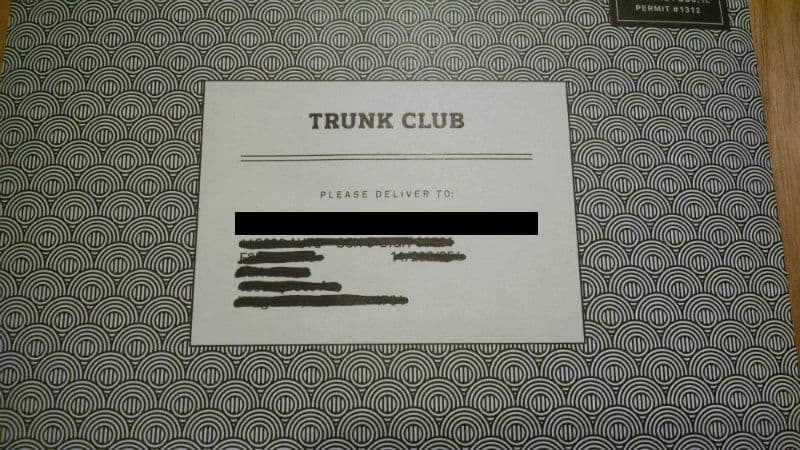 I was intrigued when I saw the envelope. It’s from the Trunk Club! I like cars, so my first thought was excitement; this must have something to do with the auto industry! Affirming my hopes, the pattern on the envelope is similar to ones that auto manufacturers use to disguise test mules:

Yes, this mail had to be about cars.

I laughed out loud when I opened the envelope and saw what the Trunk Club was really about: 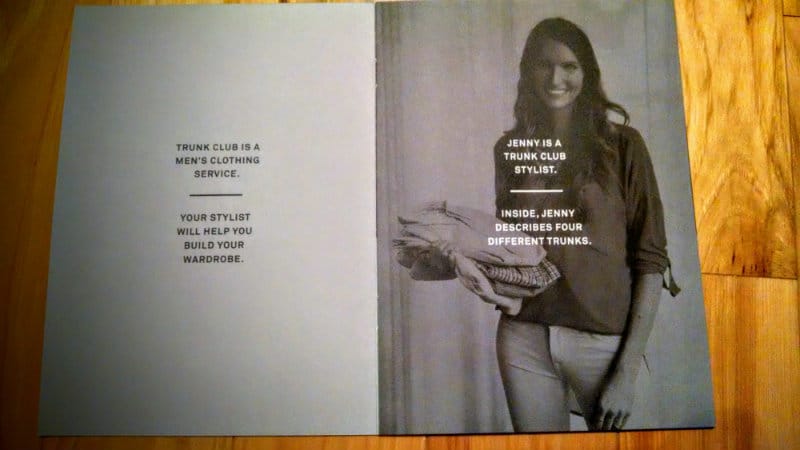 So, this is a service that assigns you a stylist to send you clothes. Apparently some men are incapable of picking out their own. Ahh, the problems we first worlders have to deal with.

I flipped through the brochure which shows some some of the sample ensembles:

If the Trunk Club had featured me, here is what my page would look like: 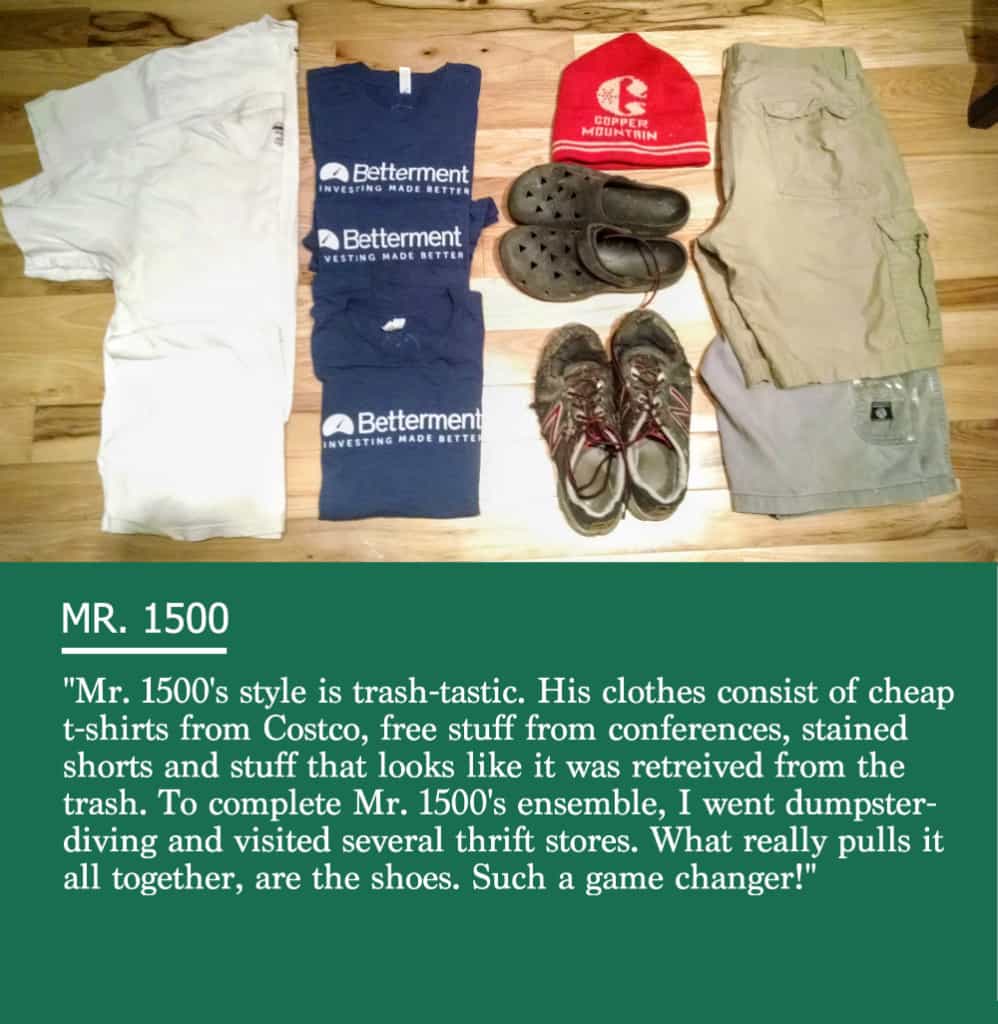 You all know what my big goal is; retire with enough money to last the rest of my life blah, blah, blah. We don’t need to go over that again.

Right here, right now, I’ll tell you one of my lesser known goals is:

To wear the least amount of clothes possible – forever.

Simple, right? I’m not into nudist camps or anything like that, but in the summer, wearing just shorts and shoes feels pretty pretty good. Note that I left the shirt out. I’m classy like that.

FI equals Freedom, but not in the way you think…

One of the benefits of financial independence is that you can truly be yourself. I feel no need to impress anyone in any way. I don’t need to network with fellow professionals to secure a future job. I don’t feel pressure to buy a nice car. Hell, I don’t even have to shave daily.

My personality is purer now than it’s ever been. Lately, for the first time in my life, I feel like I can be who I really am. I’m more positive, carefree and confident. I’ve also noticed that I’m not as introverted. Today, I saw a guy on an electric skateboard and struck up a conversation. I would have never done that 3 years ago.

The Journey was never about Money

When I started writing, the main goal was monetary with some lifestyle tweaks to facilitate saving more and spending less. However, I’ve come to realize that the real goal is something else completely.

Deep down, the goal isn’t financial independence, but getting my priorities and life in order.

Financial independence and early retirement are just happy side-benefits of the right lifestyle.

I still have work to do. I need to get better in certain areas. I acknowledge that I’ll never be perfect. And that’s how life should be; a journey of growth and learning.

However, I’m as happy as I’ve ever been.

Even without the Trunk Club in my life.