We have a neighbor named Ruby. Well, not really. In real life, her name is something else. But on the off chance that she would see this (ha!) I have changed her name. Not to protect her innocence, but to protect the innocence of her children.

You see, Ruby is bad with money. 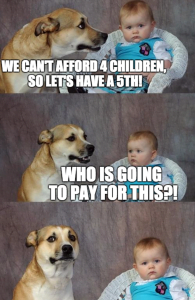 Ruby grew up poor. Dirt poor. Ruby has gone to bed hungry more than once in her life. This part does not make me happy. In fact, none of this story makes me happy. It makes me angry, because her behavior affects so many others.

Ruby and her husband have four children. She sees a “spiritual guide” frequently, who once told her she has “five celestial children.” (Mr. 1500 note: You just can’t make stuff like this up.) When I met Ruby, she was pregnant with her fourth terrestrial child. Guess what she just announced? Number five is on the way. So yes, she decided to have five children because of a psychic.

With four children, she is a stay at home mom. (Nothing wrong with that, I stayed at home with my girls for eight years.) So she doesn’t work. She doesn’t bring any money into the home. Her husband works, but not very many hours per week. The problem with that is he has the kind of job you can’t phone in. He actually has to physically be at the job site in order for the work to be done. His job is kind of like waiting tables – you can’t work from home.

So she doesn’t bring in any money into the household, and he brings in very little. Guess what her favorite thing to do is? I mean, besides watch Reality TV and read People Magazine? She likes to shop. Oh wait no, she LOVES to shop.

Her absolute favorite past time is keeping up with the Joneses. Anytime anyone on our street gets something new, she wants one too. One neighbor bought a pool – suddenly she is salivating over the prospect of adding one to her yard, too.

Another neighbor bought a new car – now her 3 year old minivan isn’t doing it for her anymore.

Do her kids have cute brand-name clothes? Check. How about toys? Top of the line, of course.

She only eats organic food. I love Jim Gaffigan’s comment about organic:

Organic is a grocery store term that means twice as expensive.

Ruby is on welfare. She’s actually on every single subsidy program she can research, apply and qualify for. I believe she spends $500 a week on groceries, in part because she has such a large family, but mostly due to the fact she won’t buy anything but organic.

She has missed payments on her house, her husband had to turn in his car and get a different one because they couldn’t keep up with those payments, but she buys only organic. She once sent him to the store for a can of coconut milk. I offered her a can I had in my cabinet, and she said “We only eat organic.” It’s coconut milk! Do you know what surrounds coconut milk? WOOD! Do you know where coconuts grow? 95 feet in the air! They don’t spray coconuts with anything, because the good stuff grows literally surrounded by impenetrable wood!!!

But all this, as vitriolic as my description is, isn’t the worst of it. No, I’ve saved that for last. She lies to her husband about how much she spends. She literally tells him that an item costs about 40% of the actual purchase price.

He is starting to catch on. He said something the other day, “I don’t know why she needs a new purse. And it’s funny how everything is always ‘half price’.”

She shared with us, as a girls night, that she regularly lies to him about purchases. He allows her to track their finances. Ruby is headed off the rails.

I mentioned before that they have missed house payments. I would love to buy their house. But even more, I would love for them to own it. As much as I don’t like her, her children are going to be absolutely wrecked if they lose their home. I don’t know where they would go. But I do know, it won’t be pretty. I don’t see a whole lot of family welcoming them with open arms, not with four current kids plus one cooking.

So here I sit, knowing exactly what needs to be done, and not saying anything. I’m pretty bossy, and holding my tongue isn’t something I’m very good at. And it absolutely breaks my heart to sit here and watch this go down, knowing I could fix it, if they would just listen…

Mr. 1500 epilogue: We’ve known this family for two years now and it’s like watching a train wreck in very slow motion. This is the same person who doesn’t like me because she thinks I don’t let Mrs. 1500 buy stuff.

It’s incredibly sad to hear their life going off the rails. In the summer when the windows are open, we hear the yelling and screaming. A couple months ago, the yelling was about the kids’ snacks: “You mean we already ate all of the snacks from Whole Foods? ITS ONLY TUESDAY AND WE HAVE NO MONEY TO BUY MORE!!” Never mind the fact that Whole Foods is expensive and 15 miles away.

I’d love to help them see the light and sometimes I try. I’ve come to realize that the best way to try to get through to someone is by setting a positive example. No one likes to be criticized. So, if you want someone to emulate you, show them how great your own life is. Maybe they’ll catch on.

However, my efforts backfire. No matter how happy they think I am, Ruby sees my working on the house and cars as a sign of weakness. In her mind, paying people to do everything for you is a sign of status. Only poor people do their own work. Oh, the irony…