So, there is a conference coming up in Dallas for financial media called FinCon. And it’s great!

It’s awesome hanging out with over 1,500 (my favorite number) folks who love talking about money as much as I do. And beer.

And there is an event for folks who are not bloggers too. It’s only $39 and the dude who runs FinCon is a great guy, so I know it will be a worthwhile event. And even better, you get to meet me! What would be better than that?

A hard kick to the nuts.

A fart in a spacesuit.

Driving your car off a cliff.

Hey hey, I’m not that boring! Get a few beers in me and I’m downright, dare I say, fun?!

Well, probably not. But I’m sure to do something stupid and if you’re filming, perhaps you’ll win $10,000 from one of those TV shows.

How to find me

At the conference in San Diego last year, there was also an event for the public. Meeting you readers is always awesome, but I missed some people too. Afterward, I received a couple emails:

Hey, I came out to meet you, but couldn’t find you.

You should come up with a shirt so people can find you.

Hmmmm. I’ve always felt funny about wearing a shirt to promote myself. I’m kinda shy and it goes against the grain of who I am. Self-promotion just ain’t my thing jelly bean.

But then I started thinking about it. Perhaps I could make a 1500 t-shirt that wasn’t a big ad? It just has to be something unique so that my three adoring readers can find me. I thought about it long and hard and then:

An idea came! Brace yourselves. Here is the shirt that I’ll be sporting at FinCon: 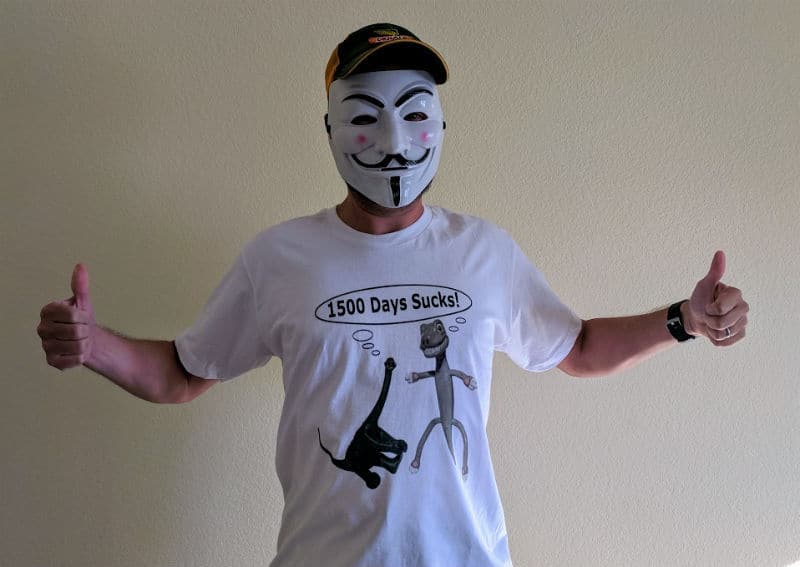 So, come out and find me. Beers are on me. Literally. I spill shit all over myself. But really, I’ll buy you a beer too. Just don’t spill it on me. I don’t need any help with that.

And That’s Not All!

The best part of FinCon is meeting loads of new people who are doing amazing things. One of the people who I can’t hardly wait to meet this year is Mr. WoW from Waffles on Wednesday. You may know him as the guy who I’m trying to beat in a death match to lose weight. Or, you may know him as the guy who won a car on The Price is Right. What you probably didn’t know is that he heads up a waffle empire. At FinCon, he’ll be releasing Waffle Pimp, the long awaited sequel to his NY Times best seller, Waffles Every F***ing Day. Rumor has it that Hollywood studios are in a bidding war for the movie rights and that Brad Pitt is campaigning hard to play Mr. WoW. 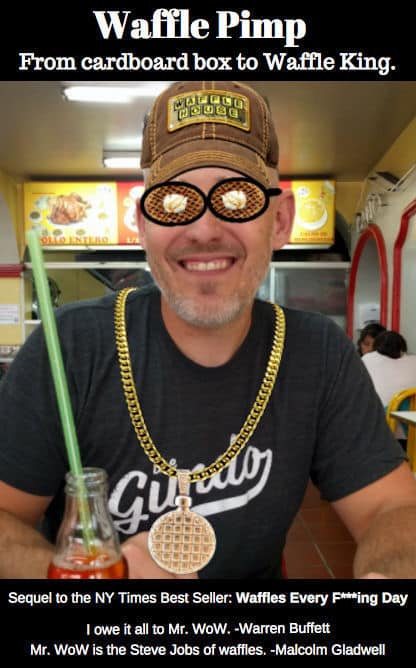 Now, on to last week’s question where I asked about your anti bucket list. Here is what you never want to do:

• Climb Mt. Everest is on mine too – especially after watching documentaries about it.
• Have a bunch of others rely on me for their livelihood (run a business).
• Gut and fix up a house (too many variables for me, would prefer to do it bit by bit or buy the result).
• Buy a new car or new house
• Go hunting
• Go to a war zone

On an unrelated note, Adam made this totally badass Interactive Early Retirement Guide. This is the coolest thing I’ve seen in a long time. Way to go Adam!

Reader Steveark is hilarious! And Steve, does your wife know you called her a Starter Wife? 🙂 :

Never have I ever wanted to be a high-ranking corporate executive. Seems like you have to give up your dignity in exchange for a lot of douchey-ness.

Totally agree there! I don’t want to put in the hours or kiss the right asses.

No boob-job for Reader Nazar!

…inserting alien objects in my body that have to be replaced every 10 years and having to replace all my bras unnecessarily as a result of this.

I don’t want to skydive and neither does Revanche from A Gai Shan Life:

Skydiving – Nope, I like my internal organs to stay internal.

Reader SpacemanFry has a good point:

Surprised with some of the things and experiences people are putting on their anti-bucket list. Something like this (a list of things that I actively say I will never do) is somewhat anathema to my philosophy of always being open to trying new things and experiences. Without pushing our boundaries a little and taking some risks life would get pretty boring and we would stagnate. At least that’s my opinion anyway.

Since Spaceman is open to new experiences, I’m going to take him to get a new tattoo (VTSAX) next time I see him! It’s on me Spaceman!

Watching the Bachelor/Bachelorette. Hard pass. (Mrs. 1500 note: SOOOO there with you.)

Meeting Mr. 1500 in Dallas. The dude is in his 40s and still plays with plastic dinosaurs and Transformers. There is obviously something wrong with him.

OK, so I made that last one up.

Really though, I can hardly wait to meet some of you. Come on down to FinCon and we’ll chat over a beer about VTSAX, financial independence, fart jokes and plastic dinosaurs…