This is the 74th edition of our guest post series called 10 Questions. It also will be one of the last. Everything must come to an end and 10 Questions will say ‘”Good bye!” near the end of 2016. If you’ve already sent me your answers or told me that you’re going to be doing so, don’t worry; I’m still going to publish you.

Today we talk to Solving Finance, a man who is absolutely obsessed with finance, loves tennis and chess, ridiculously corny jokes, and exclamation points!!!

He worked all through college while maintaining an honors-level GPA so he could graduate debt free.

He started his blog because he wanted to share his experiences with money and finance.

Solving Finance, it’s all you.

Tell me about your blog and why it’s great.
My blog is about solving finance, one of life’s greatest mysteries and to document my journey to financial independence. I’ve been fortunate enough to have a $40,000 net worth by the time I finished college at the age of 21 through hard work and smart choices. I feel like I’ve been HANDED an opportunity by being able to live in a developed country and I want to make sure that I don’t waste the opportunity given to me. 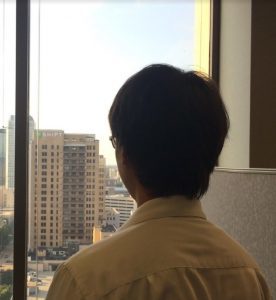 I have a unique perspective on personal finance coming to the United States as an immigrant and write posts from a personal experience standpoint. My post that was featured on Rockstar Finance isn’t a usual thought that goes into making purchasing decisions. I have a lot of ideas that I have drafted that provides a different angle when it comes to personal finance.

I cover different topics such as negotiation, budgeting, saving, networking, etc. I just started working in Corporate America 2 months ago so it’s been interesting practicing the “have a great work ethic” attitude I’ve been preaching by juggling blogging, networking, and working full time.

What post are you most proud of and why?
I’m very proud of my recent post, using motivation to work for you. My mom’s side of the family lived in poverty and I hope to have gotten my story out there to be able to inspire people to do anything that they possibly can to avoid poverty. All of my decisions that led me to have a $40k net worth while in college double majoring and triple minoring stems from this motivation. I have it written down and taped to my wall so that I never forget.

The fact that my parents risked so much for me is the reason why I’m so motivated to get to early retirement and give back to my parents. They’ve risked their jobs (if the company found out my parents got me a green card, our family would probably be in ruins) so that my brother and I could thrive in the United States. I would hate myself if I didn’t get to where I wanted to be when I was in full control of the situation and my choices.

1500 Days is about early retirement. Do you have early retirement dreams? At what age do you think you will retire?
Oh man, I can’t wait until I retire early! (and that’s me saying that after working 2 months). I want to retire at the age of 35, 13.5 years from now. I have a couple of goalsthat I want to achieve to get to millionaire status and hoping to live off the investment income that I get from the million that I could generate.

When you are 90 and look back on your life, what do you hope you have accomplished?
I really hope that I get to live to 90 🙂 healthcare is evolving at lightning speeds! I hope to have accomplished something that gives me no regrets. That’s all I want in life, for me not to have regrets. I can’t live with the fact that I was the reason why I didn’t do something that would have been smart and fun of me to do. For example, I was very bad at telling people what I want, I’ve changed that and now I try to fight for everything that I want.

On the flip side, I try to avoid putting my time and money into projects that I know won’t provide a lot of value or is too risky. I’m a proponent of spending your time that gives the highest value and if I avoid certain things that would have been smart and fun but too risky for me to do, I wouldn’t have any regrets!

How do you handle people with different views on money, ie spendy people?
I ignore them. My friends all go out every weekend and call me a cheap “fill in the blank” (hopefully jokingly) that I don’t go out as much as them but I don’t get sucked in to that lifestyle. I don’t want that holding me back so I reason that isn’t generating the highest value for my life. I’m doing everything for my parents who I’m going to give everything to once they retire (the company that my Dad works for will almost force him to retire at 60).

Did you grow up with money? How did your money situation growing up influence you?
My family was middle class. We lived comfortably with no particular money troubles but we didn’t live with a huge surplus either.

You could call me almost a greedy kid when I was little. I lived for the surplus. When I got a dollar, that’s a dollar that went into the piggy bank. I am heavily influenced by my mother who didn’t buy me a lot of stuff. She would say something was “too expensive.” Also, she would say almost everything I brought to her was expensive (even stuff that costs $1!) so I learned to take her advice with a grain of salt.

Did your parents teach you about money as a kid? How so?
They indirectly did. They lived extremely frugal lifestyles by saving pennies where they could. However, over the years I’ve noticed that they didn’t know how to buy. They would buy the clothes that charged a brand premium but look for ways to use less electricity to save pennies. They saved pennies but they looked for ways to spend dollars, which is something that I’m trying not to do.

We notice a lot of frugal people are into board games – what is your favorite?
TABOO!! It’s not necessarily a board game but man that game can get funnnn (and competitive, I’m sure I got some judging looks when I play because I get very competitive). Settlers of Catan is a very fun game too!

What do you do for exercise?
I run 3x a week outside after coming home from work. I also do body weight exercises like push ups, squats, and the like. It’s helped me sleep much more intensely which lowered the amount of time I need to sleep. However, I love sleeping so I sleep the same amount anyways!

What is the best thing you’ve read lately?
The Tipping Point by Malcolm Gladwell. He’s a phenomenal writer who communicates ideas very nicely and I am convinced about a lot of ideas that he argues in his book. It’s analyzing how trends happen and I thought it would be more technical in nature but he analyzes more of the psychology and human effects of how trends happen. Interesting thoughts!