What is Camp FI?

I just came back from a retreat called Camp FI. This is an event held at various places in the ‘States. Folks from all walks of life come to talk about money, drones, Warren Buffett, life, travel, cheese curds, credit cards, dinosaurs, real estate, hog calling, index funds, beer and books. I attended one earlier this year in Florida:

This edition of Camp FI took place near the St. Croix River in Minnesota and the setting couldn’t have been more beautiful: 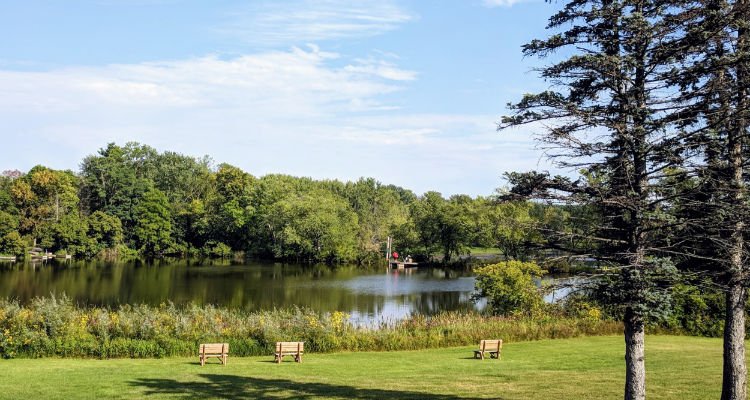 The conference was three nights long and featured six guest speakers, impromptu break-out sessions and a whole lot of hanging out.

The first speaker was the Physician on FIRE who talked about financial independence with children. I had never seen PoF give a talk before, but I knew he’d be good and he didn’t disappoint: 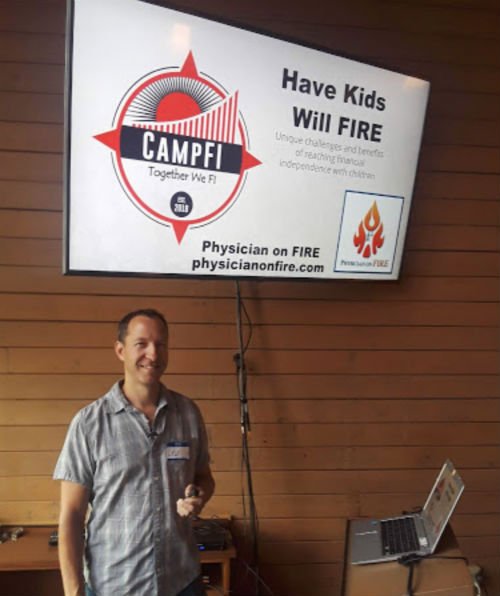 The next speaker was Chad (Coach Carson). Chad talked about real estate investing strategies and more: 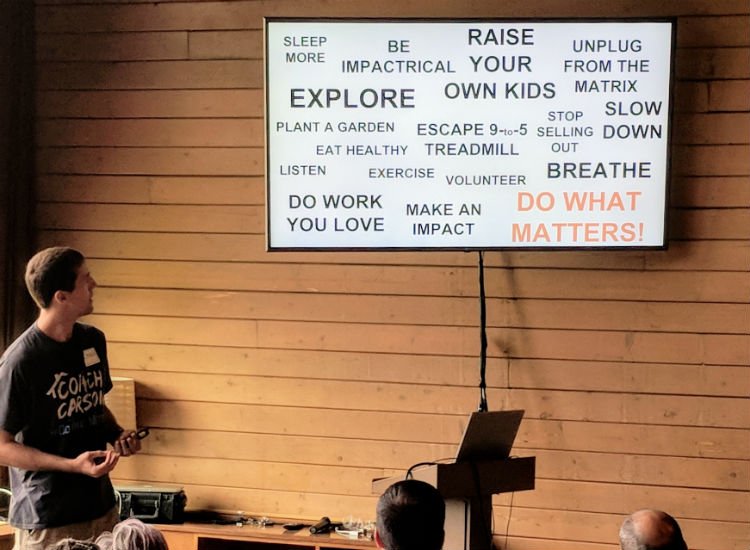 I was surprised to see myself (humorously photoshopped) in part of Chad’s presentation. I’d get revenge the next day…

Cait Flanders was next. Cait talked about her struggles and living with less. It’s inspirational to hear a story of someone that made mistakes, realized it and pivoted to a better place so early in life. Many humans never figure it out.

And her talk was a reminder that I overcomplicate my own life. I heard rave reviews from more than one attendee about Cait’s book and plan to read it soon.

The first speaker on Sunday was Anthony from Break the Twitch. I had never heard of Anthony or his blog before, but he delivered a message a whole lot of folks need to hear:

Stop looking at your phone and start living.

He said it much more eloquently, but you get the idea. 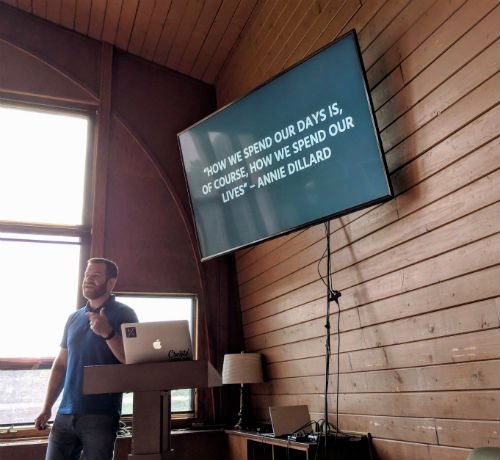 Next was Tanja from Our Next Life. Tanja is a pro and I knew she’d do a great job, but I didn’t expect her to open up about some of her personal struggles. I appreciated her honesty. 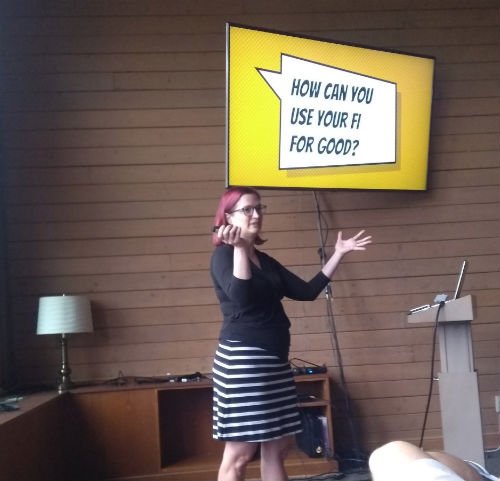 I was the last one to speak and took the opportunity to exact revenge on Chad. I knew Chad was a champion hog caller in college, so I scoured the internet for some old footage. I happened to find a video when things didn’t go quite right for Chad. Sometimes you call the hogs. Other times, well…

I Just Want To Be

On the first day of Camp FI, I met DocG from Diverse Fi. DocG is a pretty neat guy. Besides being a physician, he’s also a real estate investor, storyteller and philosopher.

On Sunday, DocG announced that he’d like to practice a presentation he’d be giving to a group of doctors later in the year. I wasn’t planning on attending because I thought he’d be talking about deep, doctor stuff. At the last second, I changed my mind. And I’m glad I did.

DocG’s talk was amazing. It wasn’t a typical powerpoint presentation. In fact, DocG didn’t use any visuals. It was just him talking. He intertwined stories with experiences to send the audience on an emotional roller coaster. Parts of the talk didn’t go in chronological order which made it more challenging, but ultimately more rewarding.

If you ever have a chance to listen to DocG speak, take it. If I wasn’t busy, I’d be heading down to the next Camp FI where he’s speaking again.

Later on Sunday, I was talking to DocG about slowing down after working very hard. At one point. DocG said this:

I just want to be.

I have spent so much time striving towards achievements or goals that I forgot how to sit in the moment and forget what comes next.

I just want to be. With a bunch of guys, joking around, drinking beers with no end point or goal.

I just want to be.

It was at that moment that I considered hurling my smartphone into the lake and heading into the woods for an undetermined, but lengthy amount of time. My wife wouldn’t like that and besides, I’m not ready to go full-on Thoreau right now, but a simpler life is a happy life. The right place to live is in the current moment. Thanks DocG for your wisdom.

One of my favorite traditions is borrowing unattended phones for mischief. At Camp FI, this translates into taking unauthorized pictures of Frugalsaurus and Spendosaurus. At some point, the victim will look through the photos on their phone and wonder why the hell there are pictures of plastic dinosaurs.

Here, I got Erin from Reaching for FI:

Made the mistake of leaving my phone at the lunch table yesterday when I left to go get dessert for everyone. @retirein1500 struck and dinosaured me while I was gone! pic.twitter.com/KKCcpM2BVR

And Miss Mazuma was the victim here:

The Financial Panther made the mistake of falling asleep on a couch:

Public Speaking Is A Superpower

In addition to giving my own talk, I also introduced Physician on FIRE, Chad and Tanja.

I knew I’d be introducing the Physician on FIRE about 24 hours ahead of time, so I had time to prepare. I thought carefully about what I would say and rehearsed my words in my mind.

I had about an hour of warning before I introduced Chad Carson, so this one was more spontaneous. It flowed well and I was happy with my work.

I thought my introductions were done, but about 2 minutes before Tanja was set to speak, the organizer asked me if I’d like to introduce her. My first thought was this:

Tanja is a powerhouse of a blogger and person. She deserved a good introduction and I almost said “no.” Then, I remembered a good story, so agreed to do it. The introduction was mostly spontaneous, but I think I pulled it off. What a relief.

At this point, you may be thinking this:

Introducing people? How hard is that? Come on now!

I used to be so nervous that I’d shake before speaking in public. I had that much fear. I couldn’t even bring myself to ask someone a question if I was in the audience. If you told me two years ago that I’d be speaking in front of 60 people, I would have said:

Amazingly, I look forward to speaking now. I still get some jitters, but every time, it gets a little easier. I have a couple more talks lined up this year that I can’t wait to do.

And I’m a better person for it. I’m more confident and assertive. People are less scary now. I’m so glad I pushed myself out of my comfort zone because public speaking is a superpower.

Have you ever been to a conference and you say something like:

Oh yeah, let’s make plans to see each other in a couple of months!

But deep down, you know you’ll never see them again?

The best part about these camps is the people. Despite the fact that we’re spread out all over the country, I know I’ll be crossing paths with many of these folks again. I already have plans with some of them.

Camp FI peeps! If you’re reading this, see y’all again in Minnesota next summer? And you better look me up when you make it to Colorado. Just guard your phone and camera. Or not*. 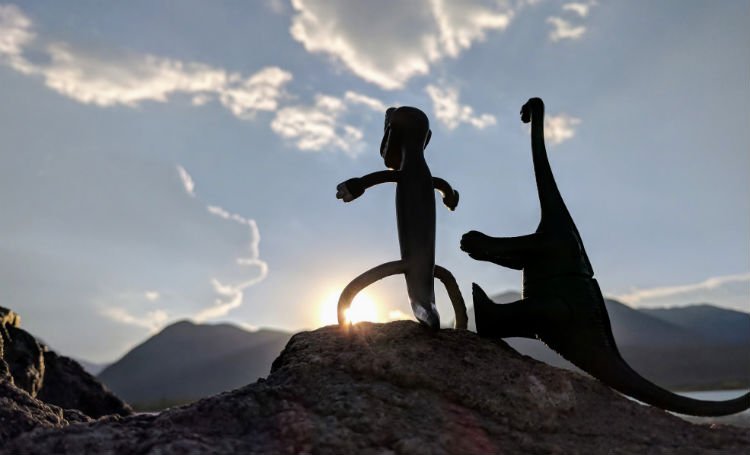 *Physician on FIRE, you should check your camera.