First of all, I do not hate my wife. By some miracle, I found a spouse who is supportive, shares my goals and puts up with my nuttiness. This is a gift.

Recently though, a friend forwarded me an article that discussed what to do if you actually do indeed, hate your wife. Hint: It has everything to do with NOT retiring early. 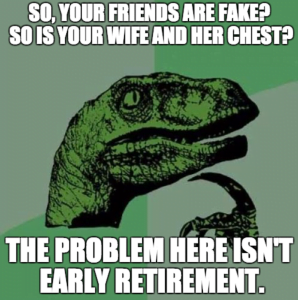 Last week, an article titled “The dark side of early retirement” arrived in my inbox. It explains how quitting early is just about the worst idea ever. Today, I’ll tell you what I think of this article.

Let’s get right into it. The author opens with this:

It seems like every few weeks I see some 20-something just out of college asking for advice on how he (and, yes, it usually is a he) can retire at 35. Watching the new movie, The Intern (something I recommend folks who want to retire early watch) reminded me of just how stupid this goal is. I had a cousin that effectively retired at 22. It cost him his marriage, career and self-respect. Now he mostly sleeps, gets drunk and is a burden on his family.

This part of the article makes sense. Just like my parents, the drunk cousin should be working. Retirement is an amplification of your free time. If you have no life outside of work, don’t quit, no matter what age you are.

To figure out whether early retirement is a good idea for you, think about what you do with your spare time now. If all you do is sleep, drink and watch dirty videos on the Internet, your work makes you a better person. Don’t quit. Ever.

On the other hand, if your weekends are filled with activities that you never have enough time for, perhaps early retirement is for you.

If you’re not sure, take a sabbatical. In six months, if you find yourself on the couch all day covered in Cheetos dust and you haven’t changed your underwear in a week, go back to work.

Later in the article, the author discussed what to do about false friends and miserable spouses:

…And it is fascinating to me the number of folks who look forward to retirement and then hate it once they arrive. The more senior they are in their careers, the bigger the problem they seem to have with retirement. A few years back I was reading a piece talking about how one of the most powerful retired venture capitalists from the Silicon Valley was extremely unhappy. No one would listen to him anymore, his “friends” enjoyed his wealth more than he did (he has a spectacular yacht that is also a spectacular burden, for instance), and he couldn’t keep a wife to save his life (he apparently was horrid to live with).

CEOs in particular have issues with retirement and often they can’t seem to transition from the waves of false friends that surround them hoping for some advantage who mostly disappear when they retire to develop real friends with common interests. Some of the loneliest people I’ve met are retired CEOs.   They acquire this massive amount of wealth, surround themselves with pretty things including a trophy spouse and then discover that once retired all of this stuff becomes a burden, often including the spouse.

So let me get this straight. If your life is filled with false friends, you should keep your job so you can keep them too? If your trophy wife is a pain in the ass, you should keep working so you don’t have to be around her? Really?

I have an alternate proposition. Ditch your false friends and your chemical ball-breasted wife. Start working on getting a real life. Your time is too short to spend with bad people.

The best part of life is the relationships we have with others. Friends and family are everything. If you don’t have that, you have a huge hole in your existence and it’s time for a course correction.

Next, the author relates a tragic story of someone who died before their time:

One of the saddest things I observed years ago was when one of my friends died suddenly. He was working incredibly hard to earn a rich retirement and spent much of his time on the road. As retirement approached, he and his wife anticipated the time they would finally get to spend together, but that wasn’t to be. He spent so much time on planes he developed a blood clot in his leg and when it migrated it killed him rather rapidly. Those moments they were living for never happened.

I’m not really sure what point the author is trying to make here, but the possibility of early death is a very good reason to plan for early retirement. Who wants to work their whole life and then die? No thank you, there is too much of the world to see.

Next, we learn about someone who was fired:

Earlier this week I got a call from an old friend who works, well worked, for one of the biggest firms in our industry. After 25 years at the company he was terminated effective immediately. No gold watch, no goodbye party, no thanks for all the hard work. And now they won’t even help the transition to private life. The firm has a bit of a rep for treating people poorly, but this exit takes the cake.

This is another great reason to plan for early retirement. You never know what’s going to happen. You might get fired like this poor guy. Your spouse (hopefully you like him or her) may get sick. You may discover a passion for travel. Even if you’re madly in love with your job, planning for early retirement gives you options. Options are very powerful and a worthwhile goal.

What smart folks do

The writer and I probably have more in common than it appears on the surface. He goes on to say this:

Rather than working to retire early, the smart folks tend to find work they enjoy so they don’t really want to retire. In a way that gives them a payoff that happens decades before someone working for retirement who discovers retirement often sucks.

Yes, enjoyable work! This is my whole reason for seeking early retirement. I want to work at things that I love. The issue is that those things may not pay me any money.

Deep down, my real goal is to decouple money from my life.

Heck, I plan on still writing code, but not having money in the equation frees me up to work on whatever code I want to work on. Not being bound or having to trade your time for money is a worthy goal.

I hate the term “early retirement.” It has too many connotations. People hear “retirement” and think of shuffleboard, golf and laying on a beach. When I quit my normal job, I will have more leisure time. I also suspect that I’ll be working harder than ever; but doing what I truly love.

On another level, if you’re obsessed with stuff like trophy wives, yachts, Veyrons and 10,000 square foot vacation homes, the main motivator in your life becomes money. Is that healthy? I guarantee you that any rich 80 year old would trade his fortune to be 40 again. Time and options are what matter. I want to live as much of my life as possible on my own terms.

I’ll never have a mansion or a Ferrari or even a Corvette. However, I have options and I value them more than anything.

Oh, and I’m also happy that my friends and wife’s boobs are 100% authentic.