We spent a good number of years living in the awesome college town of Madison, Wisconsin. Except for the harsh winters and terrifying taxes, Madison is almost a perfect place to live. It’s a beautiful city with lots of outdoor activities and good people. The Dane County Farmers’ Market may be the best in the country.

At this point in the conversation, I was not nearly as enthusiastic as Mrs. 1500. Actually, I was a bit disgusted.

With great apprehension, I took a look at the treasures Mrs. 1500 had rescued. To my surprise, all of the clothes seemed to be in great shape. Nothing was stained or smelled like beer or vomit or even cats. I cautiously approved the finds, ran them through the wash and put them away in my closet. 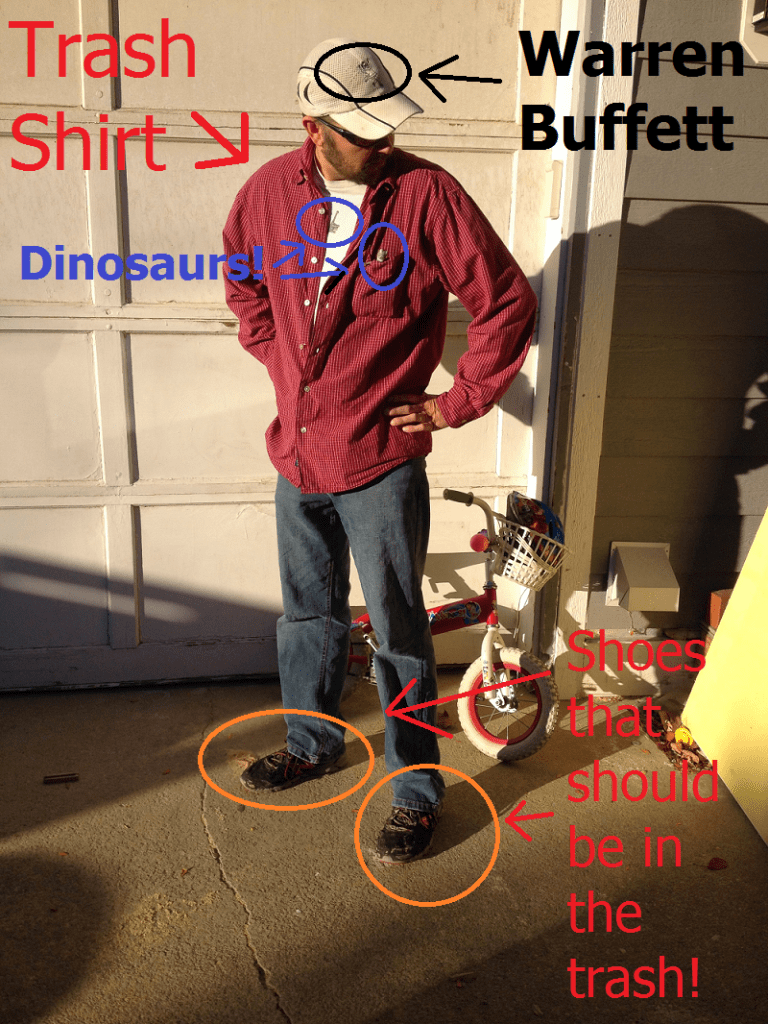 Although this was 5 years ago, I still wear much of the clothes that the Mrs. found that day. One of my favorite items was a long sleeved, button down, red shirt. It became one of my go-to clothing items in the cold seasons (9 months of the year in Wisconsin). When it was cool, I would throw on a random t-shirt and then this shirt over it.

Well, not all garbage. However, I’ve since come to learn that people throw out perfectly good stuff. I used to laugh at the dumpster divers of the world: “Ha, those people are going through someone else’s crap!” Now, I am the trash picker and it is a badge I wear with honor. Every one of our daughters’ bicycles have come from the garbage. So did our wheelbarrow. Many other tools too. And I’m an amateur. The Frugalwoods are Jedi Master trash pictures; look at some of this stuff!

A couple months ago, disaster struck my red shirt. I was working on the house and part of the shirt got caught on a nail and tore. Ugggh. I showed the tear to the Mrs. who insisted she couldn’t fix it. I took the shirt to the garage to toss it in the trash. I looked at the shirt, looked at the garbage can and then looked at the shirt again. I couldn’t bring myself to do it. Of course, it was just a silly shirt that narrowly avoided a date with the dump half a decade ago, but it just felt wrong to discard it, especially after it had narrowly averted the same fate once already.

I put the shirt back in my closet where it hangs to this day, waiting for the cold weather to set in. I have no idea how long it will last, but the shirt and I have been through a lot together. Just like the shirt, I have scars. Together, we’ll grow a bit older together.

*I actually found these clothes still hanging on their hangers, lying on top of towels and other clean things. They were clean, and upon further inspection, Mr. 1500’s exact size. I picked up an entire wardrobe for him that day. Except underpants, because that is the one thing you buy brand new, no matter how frugal you are.