Mrs. BITA came up with an awesome Friday Gratitude post! It’s so awesome that I’m publishing it a day early. Thanks Mrs. BITA!

Last week was a rough week at work. Deadlines were looming, unreasonable demands were lurking behind every cubicle wall, and panicked managers were scheduling a meeting a minute. During the accumulation phase of financial independence and early retirement, there is nothing like Corporate America at its very worst to make one feel a close affinity to Sisyphus. The last straw that broke this camel’s back was when we were handed our annual performance evaluations and my salary increase and stock grant were lower than I expected. By the time the weekend rolled around I was a whining ball of discontent.

I’ve spent the last few days realizing that I was behaving rather badly. So when Mr. 1500 gave me the opportunity to write a Friday Gratitude post, I jumped on it.

I’m going to write to myself, to remind myself of all the reasons that I have to not be a thankless, dissatisfied brat.

I love you. You know I do. Use that as lubricant to make it easier to bear what is to follow.

Yes, you suffered through a few meetings that made you want to smack your head against a wall repeatedly. Yes, your raise was smaller than you expected. Boohoo. Allow me to remind you that you and Mr. BITA have set a goal of saving $160,000 this year, and in the first third of this year you were more than halfway there. You are trying to save more than most folks on this planet make in a year. So no, you entitled brat. You don’t get to whine about a smaller-than-you-would-have-liked raise. You get to be extremely grateful every minute of every day for the extraordinary luck that has put you in the position to save as much as you already do.

Putting aside the money for a minute, how about some gratitude for Toddler BITA?

When you and Toddler BITA took a walk early last week, you chanced upon a worm. Toddler BITA bent low to examine it with the respect all worm-like creatures deserve, and then announced that it was a ‘dead worm’. Later than night, at the dinner table, it occurred to you that you didn’t know what exactly Toddler BITA thought dead meant. So you asked her. And she said, “It means so long”, and, when questioned, steadfastly refused to elaborate. You weren’t sure if she was being deeply philosophical, or just a weird toddler. A few days later, Toddler BITA was playing with the toy pictured below – those are gears, she calls them ‘flowers’: 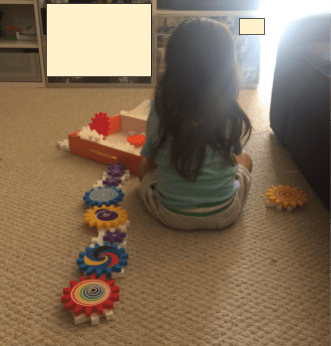 As she started playing, she informed Mr. BITA that she was going to make a ‘flower dead’. Confused, he asked if she meant a flower bed. She looked at him with pity, sorry that he was so slow on the uptake. She built out what you see above and then said, “See! A flower dead. It is so long.”

Do you remember how you both laughed till your stomachs hurt? How is that gift of laughter not something to be extremely grateful for?

On Saturday night you hosted an old friend who was visiting from India. Much wine and beer was consumed, and you stayed up till the wee hours catching up. You even got to discuss finances with him, and the idea of early retirement. If the enmeshing of old friendships and new ideas, all marinated in wine, isn’t cause for gratitude, I don’t know what is.

On Mother’s Day, last Sunday, Mr. BITA whisked Toddler BITA out of the house soon after she woke up and they stayed out till lunch. Four hours of uninterrupted you time. What a gift! Guess what we should feel when we receive such stupendous gifts? That’s right: Gratitude.

Let us put aside all these many instances of joy that you were blessed with in just this past week. Shall we instead examine your life as a whole for just a moment?

You have parents who love you and believe in you.

You have a sibling whom you adore.

Your husband, child and dog all conspire to make you happy an order of magnitude more often than they cause you sadness.

You have your health.

You have hot coffee in plenty, and never wonder where your next meal is coming from.

You get to travel and explore the world.

Hummingbirds frequent your back yard.

You have friends you can rely on in your hour of need.

Inexplicably, miraculously, folks regularly show up at your blog (not quite in hordes, but certainly more than a trickle) to read what you write.

You have the immense good fortune of being able to plan to retire at the age of 42.

Indian babies often have a little black dot on the forehead, or on one cheek. Why? The ‘evil eye’ is attracted to good fortune, and the black dot is supposed to ward off the ‘evil eye’ (the idea being that the little black dot mars the perfection of the child, and fools the evil eye into believing that its work there is already done, and it need pay no further attention to this particular child). If anything ever needed a giant black dot, Ingrate BITA, it is the life you are so fortunate to live. Your happiness portfolio is far more familiar with the bear than the bull. How you can ever view it with a jaundiced eye is simply beyond me.

The thing about an attitude of gratitude, Ingrate BITA, is that it is a choice. It is a choice you have to make every day, and frankly, you have no excuse for not choosing gratitude. None at all.

And on the off chance that you aren’t yet awash in gratitude this beautiful Friday, let me leave you with these immortal words by Bill Bryson:

“Not only have you been lucky enough to be attached since time immemorial to a favoured evolutionary line, but you have also been extremely – make that miraculously – fortunate in your personal ancestry. Consider the fact that for 3.8 billion years, a period of time older than the Earth’s mountains and rivers and oceans, every one of your forbears on both sides has been attractive enough to find a mate, healthy enough to reproduce, and sufficiently blessed by fate and circumstances to live long enough to do so. Not one of your pertinent ancestors was squashed, devoured, drowned, starved, stuck fast, untimely wounded or otherwise defected from its life’s quest of delivering a tiny charge of genetic material to the right partner at the right moment to perpetuate the only possible sequence of hereditary combinations that could result – eventually, astoundingly – in you.”

Love always, and a swift kick in the pants,

The Voice In Your Head, who is ever so grateful to be along for this stupendous ride