After a short hiatus, Ask The Readers is back! Chime in in the Comments section. I’ll feature my favorite answers next week.

When I was a child, my parents guarded the financial details of their lives like the feds guard gold in Fort Knox. I asked my mother this once:

How much money does dad make?

I remember my mother getting angry and saying something like:

That is none of your business! Don’t ask again!!

I didn’t understand my mother’s reaction. Was she embarrassed?

Eventually, I snuck down to the secret file cabinet in the basement and looked at my dad’s paycheck stub. I was surprised by how much my dad made and still didn’t quite understand why my mother was so protective of the information.

My mother’s behavior wasn’t unusual though. Most folks guard their numbers like a deep family secret. And I don’t think that they should.

My Kids, Money And Net Worth

A couple of years ago, I decided to tell Older Daughter what our net worth was. She was 9 at the time which may seem too young, but she is an old soul in a young body. I knew that she could handle the information. And more than that:

When I told OD, I could tell immediately that she grasped the significance of it. Her eyes nearly popped out of her head:

I explained to her that we weren’t normal. I had a good job, but also worked very hard to save up the nest egg. I told her how fortunate I was to no longer have to work at my age. I think it sunk in.

However, I was worried too. Would this revelation quickly be followed up by this:

If we have money, why can’t I have this or this and this?

So far, this hasn’t happened.

Younger Daughter (YD) is different. We recently had this conversation:

Telling YD about our net worth would serve no purpose at the moment. YD could not care less about money and hasn’t wrapped her mind around it yet. It doesn’t help that she’s afraid of small round things including coins. Side note: Imagine the look on relatives’ faces when we have to tell them not to buy YD any clothing with buttons because she fears them! 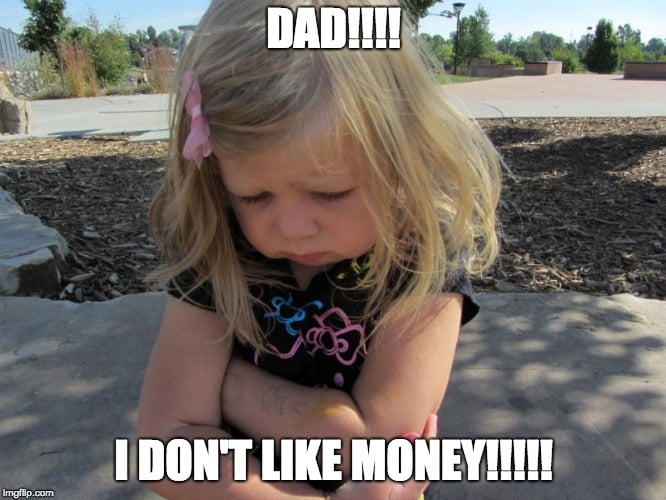 Money Is The Beginning, Not The End

In American society, we worship money and those who have it. There are TV shows that tour wealthy peoples’ homes. Magazines publish lists of billionaires. Warren Buffett is worshipped for his billions, not for his generosity.

Money should be the starting point of a good life, not a goal. And we’d all be better off if we talked about money openly. We could then help each other out and move on to better things. This is one of the reasons I’ve posted my financials from the start. While money is critical to achieving early retirement, it’s up to you to figure out how to live a worthwhile life.