I usually don’t do much in the way of guest posts, but reader Todd wrote a fun little diddy that I can’t help but publish. Todd may be the master of delayed gratification (what are you on Todd and can I buy it?), so he fits the FIRE mode very well.

Todd loves hats.  I love hats too, so I’ll warm you up by showing you some of mine:

Take it away Todd!

I am a loyal reader of 1500 Days (I’ve spent the last six months going back and reading EVERY post Mr. and Mrs. 1500 have ever wrote) and recently felt inspired to write a post of my own about a recent purchase.

When I was younger, I had this weird habit of getting a present and seeing how long I could go without opening it. Sometimes I’d last a few weeks, sometimes a few months, and as I got older, I remember letting one sit, still wrapped, in my closet for nearly 10 years (it was an 8th grade graduation gift from the school that I ended up opening when cleaning out my bedroom after I completed college). I guess this is one of those early signs of an individual who would eventually seek out FIRE. Delayed gratification at its finest. 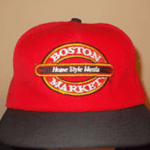 However, I recently did something I haven’t done too often since really honing in and focusing on the FIRE lifestyle a year ago – I bought my wife and I a present. Even the most stringent early retirement hopefuls have their vices … some can’t let go of dining out, cable TV, or house cleaning services (yikes, we still have/do all three of those … maybe that’s why I don’t have my own blog – not hard-core enough to roll with the bigshots). For me, clothing is definitely not one of them. I’m proud to have some clothing items that I still regularly wear that are more than half my age (normal for a new-born baby, not so much a 30-year-old man). However, I do have one vice that gets me every time. It’s a weird one … no, not that weird, get your head out of the gutter … but nothing gets me excited like a brand new hat. Since I was a little kid, I loved collecting hats from every place I would go. Sporting events, trips to different cities, off the wall restaurants (and even ones that weren’t – I remember my Dad bartering to get me a Boston Market hat from an employee one time to add to my collection). However, despite my infatuation with caps, it’s something I’ve had to curtail, as I have more than enough to last me through several lifetimes at this point.

Despite spending the past 12 months diligently shifting to a FIRE mind-set, questioning, and waiting out most purchases, there is one luxury purchase that has been on my radar for quite a while. After scouting out some deals (a 15% off coupon code along with free shipping, 3% cashback on Ebates, and 2% cashback on my rewards credit card), I bought not one, not two, not three (go Lebron!), but four new hats (down from $109.96 to $80.72)!

These presents aren’t for today though, and they aren’t for tomorrow, or even the holidays … these hats are for the two BIG days that await us on our FIRE journey.

The first I’m hoping we can give ourselves in 6-7 years: 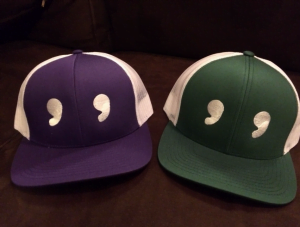 While the second pair won’t be taken out of the closet for another 10-12: 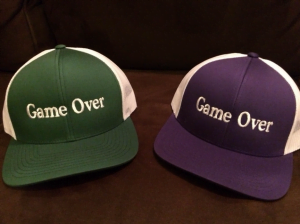 I think for most in the FIRE community, both of these don’t need much explanation. I can’t take full credit for the idea – I believe I saw a joking conversation in the comments section in one of the blogs I read that mentioned the concept of Game Over paraphernalia for early retirees … I just actually really liked the idea and wanted to use it as motivation.

So they will be getting wrapped up, to sit on the shelf, in solitude until the day they’re meant to be presented to our future-selves. 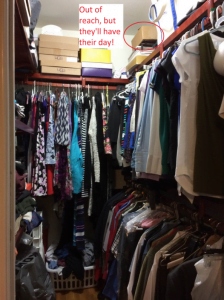 I imagine some years they’ll go completely forgotten, while others will have times where I’ll glance at the box and feel like I’ll never get to open these gifts. But I know that at the end of my journey (and a quick pit-stop along the way when we reach the Double-Comma Club), our prize awaits … those sweet Trucker-Style, custom-designed “Game Over” hats. Oh yea, and that whole quitting our jobs in our early-40’s thing and having complete financial freedom for the rest of our lives.

Others can have their new cars, big houses, fancy clothes … I’ll just continue to look forward to the day my wife and I can wear our $80 worth of hats.

Thanks Todd! If this blog is still around when you get to open your hats, how about a sequel post?