“The true test of a man’s character is what he does when no one is watching.” –I have no idea who said this.

We’ve lived in  our current home for 16 months now and we’ve been working on it almost the whole time. This isn’t the first time we’ve renovated a house, but some things never change. One consistent and disturbing thing I’ve noticed in every home I’ve ever renovated is extremely shoddy work performed by past occupants. Some of it is superficial. In other cases, it’s dangerous. The current home is no exception. We’ve stumbled upon the following:

However, this summer, Mrs. 1500 and I discovered something that epitomizes crap construction. We were doing some yard work when a part of a little concrete wall that borders our property fell off. “Interesting” we thought; concrete walls aren’t supposed to crumble after being bumped with a rake. We looked down to investigate further and saw this: 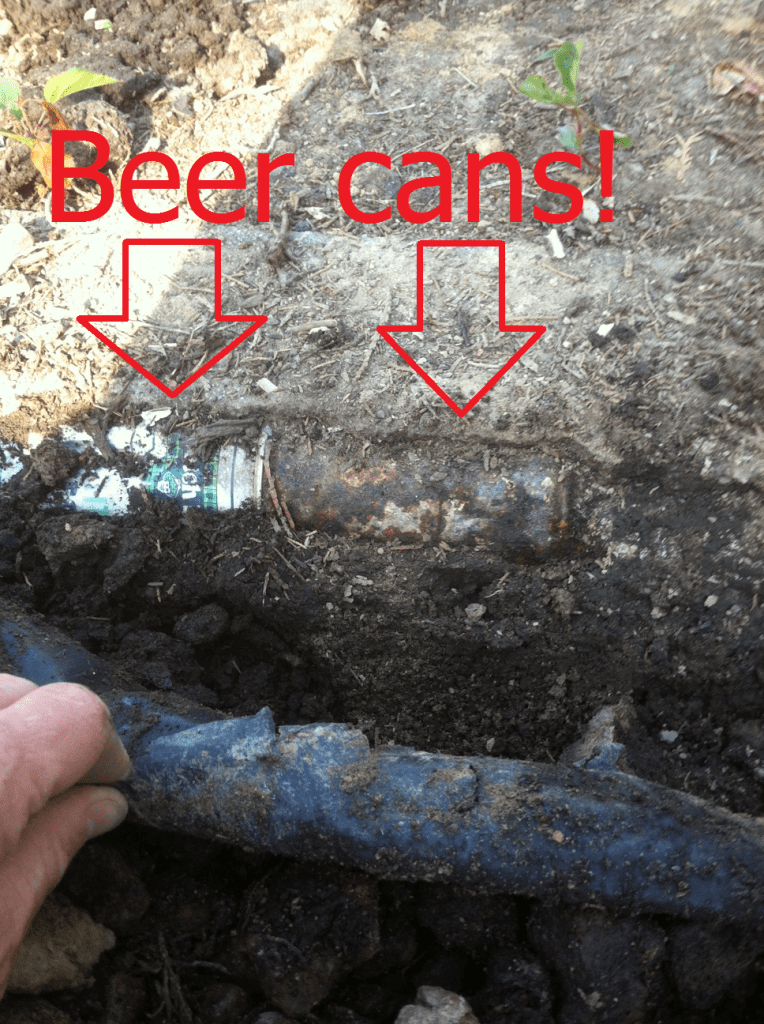 Your eyes do not deceive you. Some joker built a wall with beer cans inside! To add insult to concrete wall injury, it wasn’t even good beer. Perhaps the wall itself is the result of drinking too much beer:

Hey Bob <BUUURRRPP!!!>, I have an idea! Let’s build a wall from beer cans! Yeee haaa!

I have no idea who did this, but I hope this dude’s career doesn’t involve construction of any type. I would love to know what this guy’s full time job is actually so I can avoid him and the business that pays him to do something. Someone help the world if this dude is a civil engineer designing dams or working at a brake shop.

Shortcuts or beercuts are never the answer

It drives me nuts when people take shortcuts. Why can’t they just do it correctly? Some random thoughts:

This is the main reason why I never hire anyone if I can help it. With only a couple exceptions, most of the people we’ve hired to do anything have been big disappointments. People show up late or not at all. When they do show up, they do bad work. I have no idea how any of these folks live with themselves. I do the best job I can for myself. When I’m working for others, I try even harder.

I don’t even let my friends and neighbors hire out without a fight. Instead, I try to convince them to do it themselves with my help. This never works and they end up with shoddy construction. The most recent example involved neighbors who hired some random person to tile a bathroom. $3000 later, it looks horrible. Perhaps, there are even some random beer cans inside the wall.

*Uglyhouse has turned a corner and isn’t ugly any more, so I will cease to call it that. It is Averagehouse now, but well on it’s way to being KickAssAwesomeHouse.